Why Does My Jack Russell Terrier Eat Poop, Grass, Sticks?

Picture this…. You are out for a leisurely play session with your Jack Russell Terrier as you stop for a moment to admire the scenery when you look down to see your precious pooch chomping on poop!

You only turn your head for a second and your Jack Russell has again eaten something it shouldn’t have! Not only can this be dangerous, but it’s completely disgusting! Why do they do it? Eating strange things is not uncommon for canine companions.

Your Jack Russell Terrier is eating grass, poop, rocks, or dirt because of a condition called pica. Pica can be caused by boredom, nutritional deficiencies, behavioral issues like stress and anxiety, or because it’s a natural tendency for dogs to do. It could also be a combination of all these things.

I’ve dug into the research and am ready to share with you all the reasons your dog eats inedible stuff and what to do to help prevent it.

Why does my Jack Russell Terrier eat grass?

There are several reasons to consider why your Jack Russell Terrier might be drawn to the green stuff. Here are a few things to consider.

However, there still are enough that this applies to that it needs to be looked at. If your Jack Russell Terrier is showing any other symptoms like lack of appetite for things they normally eat, diarrhea, vomiting, lethargy, or other signs that they are not themselves they could be eating grass because they are sick. Take them to your vet.

Of the list of non-food items your dog is munching on grass is probably the least concerning. It’s a very common behavior for dogs and vets generally agree it’s also pretty harmless.

If there are concerns it would be to make sure that your dog isn’t munching on grass that has been treated with chemical fertilizer or weed spray that could potentially make your dog sick. If you think your dog has been eating treated grass it’s best to contact your vet.

You also want to be sure that it’s just grass that your dog is eating and not anything else hiding out in the grass. If they have found poop, or a dead carcass, or are actually eating dirt or something else then that can be dangerous.

If you are sure that it’s just untreated grass and they aren’t eating an excessive amount then it shouldn’t be too concerning.

Why Does My Jack Russell Terrier Eat Sticks, Rocks, Mulch, Paper, and Dirt?

Is your Jack Russell Terrier chasing or chewing on its tail?

Everything to know about your Jack Russell Terrier’s Tail, (Docked, Length, Style)

Yes, sticks and rocks are very much a problem and can become very dangerous if your Jack Russell Terrier gets one stuck in their intestines causing a blockage.

They could also cause your dog to chip or lose its teeth. Some sticks or wood pieces can also be poisonous to dogs such as Buckeye, Chestnut, and Oak. Acorns as well contain chemicals that can be very dangerous to your dog and cause poisoning if swallowed or eaten.

There is a big difference between playing with a stick and chewing on or eating a stick! As long as you are engaged and watching your dog you should be fine. Puppies will need special care and attention when learning to play with sticks so that they don’t get in the habit of chewing on them.

Why Does My Jack Russell Terrier Eat Poop?

If your dog routinely eats feces it is called Coprophagia. This is the actual medical term for the problem, but why do they do it when it’s soooooo disgusting!?

Well for dogs it’s really not that repulsive, in fact, it’s a fairly ordinary instinctive thing for them to do.

Eating poop is usually not too concerning if it’s their own that they are treating themselves to. It becomes problematic for your pup when your dog eats poop from another animal that has intestinal parasites or other illnesses. This makes it almost certain that your dog will get them as well

See the next section for details on how to prevent your Jack Russell Terrier from eating poop and other things it shouldn’t.

How Can I Stop My Jack Russell Terrier From Eating Things it Shouldn’t (Poop, Rocks, Sticks)?

How Can I Stop My Jack Russell Terrier From Eating Too Fast?

One problem you may have if your Jack Russell Terrier loves his grub is eating too quickly. If your pup is taking less than 2 minutes to finish off his meals then it will be beneficial for you to help him slow down. Eating too quickly can cause their stomachs to bloat and make it difficult for them to digest and absorb the nutrients in their food.

When most people think of dog breeds that are picky eaters we tend to think of the smaller breeds such as Maltese and Yorkies. It’s true that there has been some interesting scientific research showing that small breeds do tend to be the pickiest eaters in the dog kingdom, but that doesn’t mean they are the only ones.

Why Has My Jack Russell Terrier Stopped Eating?

Your dog may stop eating his food if it is under a lot of stress if its environment has changed if it is struggling with an underlying health condition if it is distracted or just being picky about what kind of food it wants to eat.

If your dog has all of a sudden stopped eating his food then you need to schedule an appointment with your vet to make sure that there is no underlying cause of illness.

What Should I Do if My Jack Russell Terrier is a Picky Eater?

If you feel like you have tried everything including taking your dog to the vet and you’re still worried that your Border Collie is not eating enough here are some more tips from Border Collie owners.

Raw food- Although controversial some owners have had great success feeding their picky eaters with this diet. A raw food diet is based on what dogs ate before they became domesticated. On this diet dogs eat raw muscle meat and bones, raw organ meats, safe fruits and vegetables, and some dairy products.

Warm it up – Sometimes a warm meal will do the trick. You can heat it up for a minute in the microwave, just make sure not to get it too hot!

Get rid of the bowl – It sounds strange, but some dogs actually prefer to eat their meal straight from the floor.

Pretend to eat it – Yes, dogs can sometimes act like stubborn toddlers, and yes pet owners have actually said when they pretend to eat the food first their dog is more willing to dig in!

Check for teeth problems – No one likes to eat when you have a toothache! Check for extra tarter buildup, sore or swollen gums, bad breath, and discoloration or brown teeth.

It can take a lot of time and money to figure out why and how to get your Jack Russell Terrier to eat properly, but if you ignore the problems and it gets worse you may end up spending a lot more time and money on vet bills or in surgery and recovery to fix a problem that could have been dealt with early on. 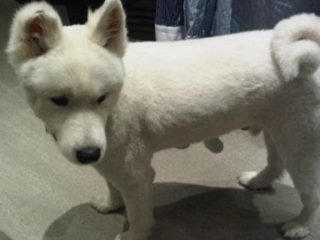 Shaving Your Samoyed? (Will Its Coat Grow Back?)
← Read Last Post 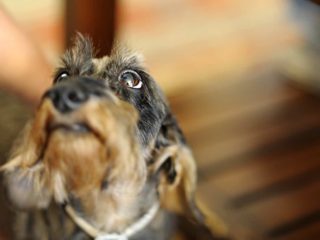