A tail can tell us so much about our dog, they are a very beautiful and important trait on our lively Jack Russell Terrier. But what is it about the tail that makes it so special? How do we know if our Jack Russell Terrier has a normal tail, or if something may be off or different?

Do Jack Russell Terriers have tails, what should they look like?

Do Jack Russell Terriers get their tails docked?

Many Jack Russell Terriers that are born in the US will have their tails docked between 2-5 days old. This has been the tradition to protect working dogs from tail injuries. In recent years leaving a Jack Russell Terrier tail un-docked has become more popular.

Docking tails is a highly controversial subject. You will find dog owners who will argue for both sides. Some owners love the long natural flowing tail of their Jack Russell Terrier while others find it difficult to groom and care for.

Most Jack Russell breeders will dock their litters’ tails before finding homes for or consulting with their pups future families.

A poll of Jack Russell Terrier owners was taken to see their thoughts on tail docking. Here are the results.

Why Do they Cut (Dock) Jack Russell Terrier Tails

Docking is a tradition that dates back to Roman times where they would dock a dog’s tail because they believed it prevented rabies. In the United stated the practice of docking tails for cosmetic reasons began in the 1950s.

Jack Russell Terrier tails were traditionally docked to prevent injuries while hunting and to stop them from wagging their tails in the long underbrush scaring away prey. It was also believed it helped to make the dog run faster.

Jack Russells have such long tails that when they are working in the fields and underbrush while hunting there are many dangers that they might encounter as far as their tail is concerned. Working Jack Russell Terriers will have their tails docked for these reasons.

Why do Breeders Cut (Dock) a Jack Russell Terrier Tail

Breeders will dock Jack Russell Terrier’s tails if they prefer the aesthetics or the look of it over a long tail. They may also dock the tails if they know that the dogs will be going to a home where they will be working and it will be advantageous for them in order to avoid injury.

Jack Russell Terriers are most often docked between 2-5 days old. There are 2 ways that the docking may be done. One is to make a surgical cut with special shears about 1 in below the base of the tail, the other is to band the tail in the same place and allow the remaining part to either be reabsorbed or to drop off on its own.

Either way, the docking should always be performed by a licensed vet in order to ensure that there are no complications such as infection or nerve damage.

Docking is done on puppies at such a young age because the cartilage is soft and the bones have not yet developed.

Dogs who are older than 8 weeks will have vertebrae in their tails that will need to be carefully cut around. Dogs this age and older will need to have anesthesia in order to avoid the sharp pain of the procedure.

What do Docked Tails Look Like on a Jack Russell Terrier

Generally, a Jack Russell Terrier tail is only docked one-quarter of its regular length, meaning they retain three-quarters of their natural tails. Some Jack Russell tails will be docked shorter.

Their tails are generally a bit longer than most breeds with docked tails, but there is a range of short and stubby with only an inch or two or longer all the way up to 9 inches. Depending on the cut of the dog’s coat sometimes the docked tail blends and makes it look as though they have no tail at all.

There is something special and almost magical about a dog’s tail many dog lovers are appalled at the thought of tail docking and much prefer that their dogs have a long natural tail.

So can you find a Jack Russell with a tail, and if so how?

Yes, you can find a Jack Russell Terrier with a tail. Many JRT owners have had success getting a dog with a tail but it will take added effort, research, and cost on your part to find a healthy puppy from a reputable breeder with an undocked tail.

Here are some things you can try.

Can a Jack Russell Terrier Be Born With a Stub Tail?

Generally, Jack Russell Terriers are not born with a natural stub tail. A short tail most likely means it was docked as a newborn. However, a variant in the DNA of an important gene during development in the womb may result in a congenitally short (bobtail) or completely absent tail.

Some breeds like Australian Shepherds have been bred to favor this gene and are more likely than Jack Russells to favor a natural bobtail.

If your dog has a short tail and you don’t know if it has been docked or not the only way to know if your dog carries this gene or not is to do a DNA test.

Jack Russell Terriers wag their tails for many different reasons. It’s a big part of how they communicate with you. Wagging their tail doesn’t always mean they are happy. They could be conveying other emotions like nervousness or fear as well. The key to understanding their tail wags is to put it together with all the other contextual clues they are giving you. What are their ears doing, their eyes, how is their posture? Noticing these things as well will help you know why your Jack Russell Terrier is wagging its tail.

Here are some things your Jack Russell Terrier could be communicating to you with its tail.

For most Jack Russell Terriers wagging their tails to communicate is a natural and normal thing for them to do. Occasionally you will find a Jack Russel that doesn’t wag its tail at all. Don’t worry, you are not alone.

If your Jack Russell Terrier doesn’t wag its tail it’s most likely just part of its personality or genes. It could also be that they have an extra curly or short tail that makes it more difficult for them to wag, but it could also indicate a medical problem and they should be seen by your vet to rule out any serious issues.

If your Jack Russell Terrier has recently stopped wagging its tail then there are some other things you should consider. If you have just moved, or they are new to your home this could just mean they are nervous and need some time to get acclimated to their new environment.

Some dogs are bigger tail-waggers than others. If your Jack Russell Terrier doesn’t wag its tail at all then you will have to learn to identify other body language cues to help you understand what they are trying to tell you.

What is Limber (Swimmers) Tail and What to Do

If you notice your Jack Russell Terrier tail hanging down and it looks limp and unnatural then he may have a condition known as Limber Tail.

Limber tail Also known as swimmer’s tail, frozen tail, dead tail, broken wag, or cold tail is a condition that causes your dog to hold his tail limp and down instead of the usual upright position. Its official name is Acute Caudal Myopathy.

It is most likely to happen after your dog has had a very active or strenuous play session, exercise, or excessive tail wagging. Sometimes a lot of swimming can cause it, being in cold wet weather, if they are confined to their crate too long, or if your doodles tail is wagging and getting whacked on various surfaces.

This could cause your dog pain and swelling in their tail, making it difficult to sit. Usually, this condition will go away on its own after a few days of rest. It’s important to try and limit exercise and movement if you notice that your dog is experiencing this problem. If it is causing your doodle a lot of pain then consulting your vet is a good idea.

If your Jack Russell is also limping this article could be useful as well. Why is My Jack Russell Terrier Limping?

If you suspect a problem it is always best to consult a vet.

If your dog is chasing, licking, or biting his tail it could be a simple game, or there could be something more going on. Chasing and biting could be an indication of fleas or mites, licking could indicate allergies.

Why Do Jack Russells Watch TV? (What Do They See?)

Jack Russell Terrier Paws (Do they Have Webbed Feet?)

Getting A Second Corgi? (What You Need To Know!)
← Read Last Post 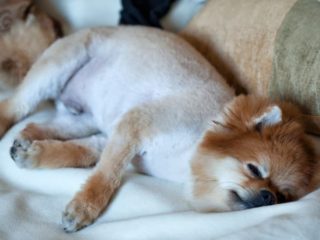 Shaving Your Pomeranian. (When To and When Not to Do It.)
Read Next Post →