One of the most expressive parts of our pups is their tails. Their long fluffy tail is an extension of their personalities giving us clues into what they are feeling and thinking.

It’s interesting to me that tails can look so different from dog to dog even within the same breed. This can sometimes make it confusing when you have a lot of questions about your dog’s tail.

The Malinois has a moderately long tail that is set low and when at rest lays along the back edge of its hind legs. When Belgian Malinoises are alert or working the tail is slightly lifted but not curved up or over its back.

So how do you know if your Belgian Malinois has a normal tail, or if something may be off or different? Should a Belgian Malinois tail be docked? What is the best way to groom and style your dog’s tail?

Keep reading to find all the answers.

Pro tip: If you are interested in the best grooming tools for your dog you can find them by clicking here now!

Note: A Belgian shepherds tail has an iconic black tip. Most of the fur on it’s tail is tan or brown, but the black tip can help identify a Malinois as purebred. It has also been used as a beacon to shepherd when herding and working the pastures.

How long are Belgian Malinois tails?

Malinois tails are on average are 12 to 16 inches long; however, it is not uncommon for Belgian Malinoises to have tails ranging from 5 inches all the way to 18 inches long.

If your Belgian Malinois’s tail is quite a bit shorter than the standard chances are that it could have either had its tail docked when born or had some kind of injury to its tail that may have shortened it.

Do Malinois Have Curly Tails?

Belgian Malinois tails do not curl over their backs like some other double-coated breeds. According to the AKC, If a Belgian Malinoises tail is curled or curly it is considered a flaw in genetics.

Malinois’s tails should be the correct length, extending to the hock. When the dog is relaxed, the tail hangs down naturally, it does not curl.

When working or playing the Malinois tail sticks out and arcs up like an upside down sickle.

One owner I talked with was told her dog was a purebred Malinois, but she wondered because he had a much curlier tail than what seemed to be normal for Belgian Malinoises. It also seemed to have a different texture to its hair than other Malinois.

She did a genetic test like this one and found out that even though she had been told he was a purebred Belgian Malinois it ended up that he is actually mixed with an Husky.

Do Belgian Malinoises get their tails docked?

Malinoises are not a breed that traditionally receives docked tails. Historically tail docking was done to prevent injury for working dogs. Even though Belgian Malinoises are considered herding dogs their tail stays down and out of the way and is not very prone to breaking.

Fun fact: A Belgian Malinois’s tail can be used as a tool in herding. They use their tail to help them keep their balance while making quick turns while herding sheep. Also, the white tip on their tails are used as a flag of sorts to help their owners more easily see their location.

If you suspect that your Malinois has a docked or shorter tail than is normal there could be a few reasons for this.

Sometimes in very rural areas owners will have their dog’s tail docked to distinguish them between wild canines and domestic ones.

If there was an injury to the tail as a puppy it may have been docked to prevent further harm to the dog.

Rarely a mother dog may accidentally chew the end of the tail off when trying to chew through the umbilical cord of the puppy after birth.

There is a lot of controversy around docking tails but as far as Belgian Malinoises are concerned there is really no reason to have any Malinois puppies get their tails docked.

How to groom a Malinois tail

Grooming your Belgian Malinois’s tail is fairly simple and similar to how you would groom the rest of them.

You never want to shave your Belgian Malinoises fur or even cut that hair too short.

Read here about the potentially harmful consequences of shaving your Belgian Malinois.

If you plan on trimming or grooming your Belgian Malinois’s hair yourself then it’s very important to have good high-quality tools to use. This scissor kit is a great place to start and can help you get the high-quality look you are going for.

Belgian Malinoises wag their tails for many different reasons. It’s a big part of how they communicate with you.

Wagging their tail doesn’t always mean they are happy. They could be conveying other emotions like nervousness or fear as well.

The key to understanding their tail wags is to put it together with all the other contextual clues they are giving you. What are their ears doing, their eyes, how is their posture? Noticing these things as well will help you know why your Belgian Malinois is wagging its tail.

Here are some things your Belgian Malinois could be communicating to you with its tail.

There’s also been a study done that shows the direction that your dog wags its tail can show positive or negative emotion.

It could also be temporary due to stress or changes in your Malinois’s life or environment and may go away once things are resolved. However, it may indicate a medical problem, in which case your dog should be seen by your vet to rule out any serious issues.

If your Belgian Malinois is whining or crying a lot then this article is a must read!

If your Belgian Malinois has recently stopped wagging its tail then there are some other things you should consider. If you have just moved, or they are new to your home this could just mean they are nervous and need some time to get acclimated to their new environment.

Some dogs are bigger tail-waggers than others. If your Malinois doesn’t wag its tail at all then you will have to learn to identify other body language cues to help you understand what they are trying to tell you.

Because our dog’s tail is such a big part of them and how they express themselves it can be quite alarming if something seems wrong with it or if they seem like they are in pain.

You should always consult with your vet if you are worried something may be off, but in the meantime, I know that having an idea of what it might be can bring some peace of mind.

Here are some common problems that you might run into concerning a Malinois’s tail.

Hair loss on a Belgian Malinois tail can be caused by several things. Allergies are generally the problem and may cause your dog to chew on its tail. It could also be an infection, mites, fleas, or hormonal issues.

For the most part, if your Belgian Malinois is chasing its tail it’s most likely just a harmless and adorable game. Puppies tend to do this a lot because they are so playful and exploring more about their world and discovering their fun long tails. If your dog is chasing his tail it might be because he’s bored or it’s just a fun game for him.

Trying out a fun training program together like this widely popular program Brain Training for Dogs can help unlock your dog’s hidden potential and help them learn how to avoid problem behaviors.

The problem comes when your dog is obsessively chasing its tail and it seems like they are in pain stressed or biting its tail and causing things like bleeding, or hair loss.

If your Belgian Malinois is licking its tail read this article that covers everything to know about Malinois licking.

If you notice your Belgian Malinois’s tail hanging down and it looks limp and unnatural then he may have a condition known as Limber Tail.

Limber tail, also known as swimmer’s tail, frozen tail, dead tail, broken wag, or cold tail, is a condition that causes your dog to hold his tail limp and down instead of the usual upright position. Its official name is Acute Caudal Myopathy.

It is most likely to happen after your dog has had a very active or strenuous play, exercise, or excessive tail wagging. Sometimes a lot of swimming can cause it, being in cold wet weather, if they are confined to their crate too long, or if your dog’s tail is wagging and getting whacked on various surfaces.

This could cause your dog pain and swelling in their tail, make it difficult to sit. Usually, this condition will go away on its own after a few days of rest. It’s important to try and limit exercise and movement if you notice that your dog is experiencing this problem. If it is causing your Belgian Malinois a lot of pain then consulting your vet is a good idea.

Taking care of our dog’s most stunning features like our Malinois’s majestic fluffy tails may take a little extra work and know-how, but isn’t it worth it!

Next step: Take a look at these articles to learn more about caring for your Belgian Malinois! 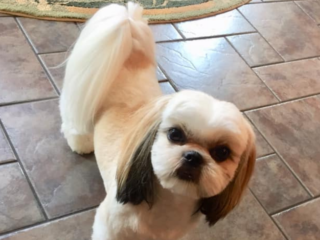 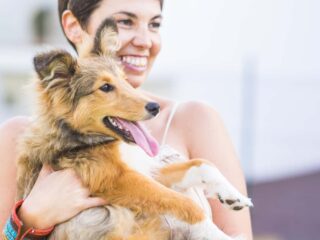 Sheltie Brushing Guide (How to & How Often)
Read Next Post →