How Much Do Pomeranians Sleep? (Inside Info From Owners)

Their adorable puffy fur can make them look like a little fluffy throw rug lying on the floor when they sleep. They look so peaceful lying around sleeping all day, but if you are like most owners you wonder is it really normal for your Pomeranian to sleep so much. Well, you don’t need to wonder any longer. I have all the answers your need.

How Much Sleep Do Pomeranians Need? Puppies, Adults, Seniors

This stage of life is very short and full of lots of shut-eye! For the first week of their life, Pomeranian newborns will be sleeping anytime they aren’t nursing. Newborns generally nurse every 2 hours but even while doing so they will have their eyes shut and look as though they are eating in their sleep.

As they grow they will slowly start to spend more time awake. Around 3 weeks old they will have around 2-4 hours of active time a day broken up into small spurts of energy and exploring their world.

Puppies are quickly growing and changing. They need plenty of sleep to fuel and recharge their growing bodies. From 2-5 months old, Pomeranian puppies will generally sleep around 18-20 hours in a 24-hour period. This includes sleeping at night and daytime naps.

Your puppy will sleep in longer stretches at night, but will still need to get up to relieve its small bladder and stretch. He may even have a burst of energy and seem like he wants to play. With some patience and guidance, your puppy can learn to sleep through the night by 4 months old, maybe even sooner.

Older puppies from around 6-12 months old will sleep about 14-16 hours throughout a 24 hour period. At this point, they should be more active and inquisitive during the day and will be better about sleeping through the night in 6-9 hour stretches. They will also take multiple naps during the day, as well as times of rest when they appear to be just lying around, but somewhat alert as well as high energy awake time when they will want to play and work.

Your adult Pomeranian will normally sleep around 12-18 hours in a 24hr period, but more as he ages. In this study, researchers found that older and middle-aged dogs slept more during the day than young adult dogs.

This was because they took more naps, not because their naps were longer. They tend to run out of energy and need to rest more often than the younger group. Older and middle-aged dogs also slept more at night than younger dogs because they had longer stretches of sleep at night (waking up later) and woke up fewer times during the night.

It’s important to remember that this can greatly differ depending on the personality and temperament of each dog as well as the atmosphere/lifestyle of your home. When I asked Pomeranian owners what their Pomeranian behavior was like they covered all the ranges of this 12-18 hr span. A big factor was how active and attentive the owners were.

Believe it or not so long ago Pomeranian were originally bred to pull sleds, they used to be a lot bigger in order to do this. They have since been bred down to be companion animals for us. They make wonderful companions. If your lifestyle is active then they will be too.

This makes me think that possibly Pomeranian tend to sleep more than other dog breeds such as corgis.

“We have 3 Poms and they do love their naps. Even at full-grown, they are still rated with intelligence of a three-year-old child that is mute. Three-year-old humans still nap.”

Your Pomeranian is considered a senior around 9 years old and at this time you will probably start to see your dog slowly increasing the amount of time it is resting and sleeping. It won’t happen all at once, but just like humans as they age they tend to slow down and not have quite as much energy as a young pup. Senior Pomeranians will sleep 14-16 hrs a day on average as they get to be 12-14 years old and older they could be sleeping up to 18 hrs a day.

At an older age, your Pomeranian sleep patterns may change as well. It’s normal for your Pomeranian to take more naps during the day and have a few wakeful periods at night. This change will probably happen slowly and should be nothing to worry about unless it’s a sudden or significant change.

If your Pomeranian has sudden or significant changes in their patterns of sleep it’s probably best to consult your vet. For older Pomeranians this could be signs of more serious issues such as dementia, arthritis, hypothyroidism, or other conditions associated with older age.

Your Pomeranian may be waking up more at night because it’s bladder is getting older and they need to use the potty more often. You can try and help with this by taking them out right before bed, and limiting their water intake just before bed as well.

Fun Fact: Senior dogs, as well as puppies, tend to twitch more in their sleep! This is due to a part of their brain called the Pons which regulates muscles and keeps them still while they sleep. This part of a puppy’s brain is underdeveloped and for older dogs, it works less efficiently.

Sleep Problems and Solutions for Pomeranian Puppies and Adults

If you are struggling with getting your Pomeranian to settle down and sleep at night you are not alone. Whether it’s the new puppy days, or you just moved, most owners go through this stage at some point.

Things that may be making this challenging can range from crying or whining at night, waking up in the middle of the night, struggling to settle down, or waking up too early in the morning.

Luckily there are some things that you can do to help your Pomeranian (as well as yourself) get the good night’s sleep you need.

Have a routine and schedule:

If your Pomeranian knows what to expect and has specific cues to alert him that it’s time to wind down and get some shut-eye it can do a lot to help them easily get settled at night. This routine can include using the restroom, bringing the noise level down, dimming the light, creating a relaxing and calm atmosphere.

It’s important to keep this schedule as consistent as possible. Going to bed around the same time each night, and having set patterns will not only signal to your dog’s brain it’s time for bed, which will in turn help to increase the production of melatonin (your bodies powerful natural sleep aid) it can also help you fall asleep more easily as well.

Give them plenty of exercise:

Since Pomeranians are a naturally curious breed and have an internal desire to play and work, your Pomeranian needs plenty of stimulation and exercise each day.

At least 1 hour of exercise a day will help your intelligent Pomeranian from getting bored or frustrated.

If they have been bored and laying around all day chances for a good night’s rest are minimal. The best time for a good exercise session is about 2 hours before bedtime. Try to include high cardio exercise as well and engaging brain activities so that your Pomeranian will be both physically tired as well as mentally tired.

Have a specific sleeping area and make it inviting:

Whether it’s in their crate in the living room, their doggy bed (Amazon affiliate link to a comfy warming bed) next to your bed on the floor, or even in your own bed. Having a designated area to go to will help create the routine and let your dog know that it’s sleep time. If your dog sleeps in his own bed, or in a crate, having something that smells like you and a small stuffed animal (Amazon affiliate link) to snuggle with can help him feel more safe and secure. This is especially true for puppies.

Take up their water after a certain time of the evening. If your Pomeranian seems to need a bathroom break in the middle of the night all the time you can try changing his meal time to be a few hours earlier (so he will get the poop out before bed) or a few hours later (so he can hold it until tomorrow). You can also take up the water dish a few hours before bed so that he isn’t filling up his bladder just before dozing off.

Either way you may want to slowly adjust the time of his meals to see if that will help with the late night bathroom breaks.

If early morning waking is a problem try figuring out what it is that may be waking them up?

Is the sun coming up? Try adding some darkening curtains. Are there noises such as birds or early morning traffic? Try adding some white noise by using a noise machine like this one from Amazon. (Amazon affiliate link).

All it takes is some investigative work to try and figure out what may be causing the problem. It can be easier to do this if you keep a log or journal of your dog’s sleeping and eating patterns. This doesn’t have to be something that you do long-term, but just long enough for you to notice a pattern so you can address it.

If nothing seems to be working, your dog has changed his sleep patterns suddenly, he seems very lethargic and low on energy all the time, or he has other symptoms like vomiting, diarrhea, blood in his stool, or other concerns then you should take him to the vet immediately to get checked out.

If you have a puppy and all its needs are met and it is still crying just remember it is common for it to whine and cry especially for the first week or so that you have him in your home. You can try a soothing stuffy like this one from Amazon (affiliate link). An older dog who is new to your home may experience this as well. If you must check on him make sure that the lights stay dim, and you are as un-intrusive as you can be. If you are working with your puppy to sleep in their own bed or crate, make sure to not give in and then expect smooth sailing after that. You need to start the expectations as you mean to go forward.

If you are thinking of having your dog sleep in bed with you, be sure to read this article:

Should I Let My Pomeranian Sleep With Me? (Let Sleeping Dogs Lie) | Paws and Learn

Does your Pomeranian follow you everywhere? Check out this article: 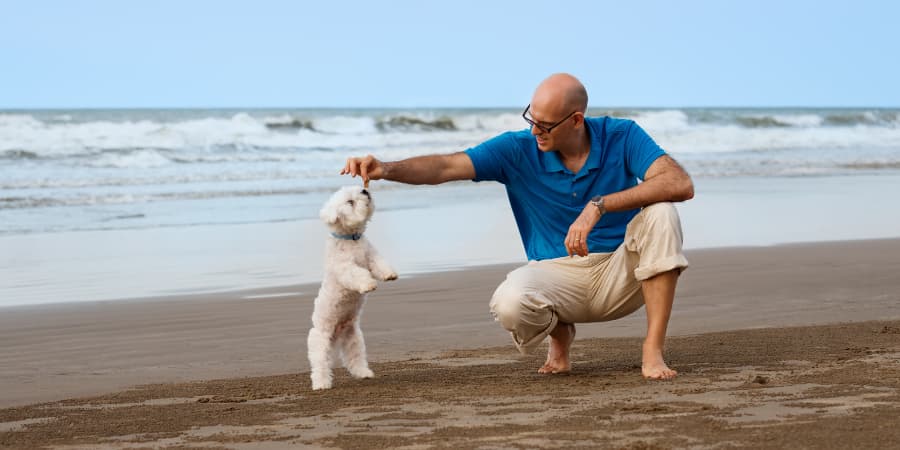 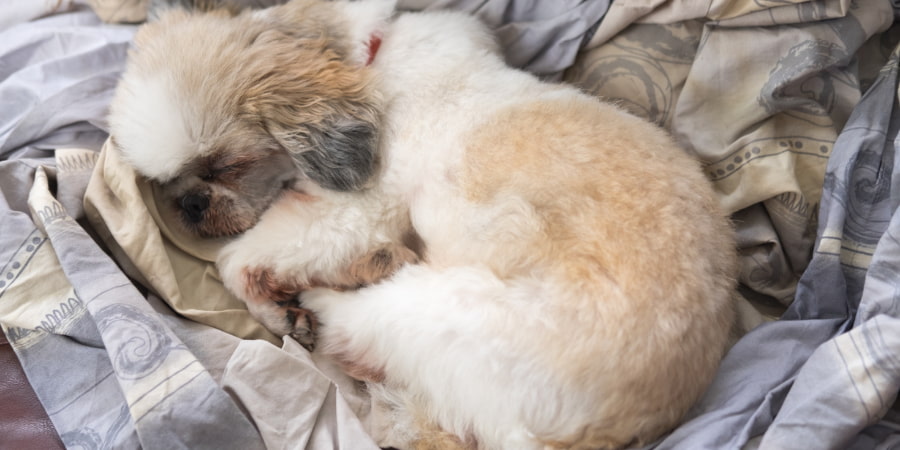 Should You Let Your Shih Tzu Sleep With You? (What Owners Say)
Read Next Post →

Why Your Pomeranian Loves to Lick. (And What to do!) | Paws and Learn

[…] How Much Do Pomeranians Sleep? (Inside Info From Owners) | Paws and Learn […]