Learning to read your dog’s body language is an important step in understanding how your dog communicates with you. Your Australian Shepherd’s ears can tell you a lot about what they are thinking. Not only do their ears tell us a lot about their thoughts and personality they serve a very important function for your dog.

Australian Shepherds should have medium-sized triangle-shaped ears that are slightly rounded at the tips. They sit high on their head and break or fold forward. Depending on how the ear folds they can have either button ears or rose ears. Some Aussies will have erect (or prick ears).

The general appearance of the Australian Shepherd’s ears includes a distinct triangle shape. According to the AKC standard, an Australian Shepherd should have rose ears or button ears. Floppy or Erect ears would be considered a fault.

Rose ears are erect at the base and folded slightly back. The rose ears of a dog often look similar to the button ears. However, the rose ear folds inward at its back lower edge, the upper front edge curves over, outward, and backward giving the impression of the petal of a rose flower.

Rose ears are beautiful, but not the most preferred among owners especially those with show dogs.

Button ears also called drop ears or hodded ears are upright at the base with the top half of the ear folding over hiding or covering the inside of the ear. This is the most common and most desirable ear set for an Aussie.

Most owners that do shows with their Aussie prefer button ears on their show dogs.

Erect, or prick ears stand fully upright. While prick ears are less common for Aussies some full-bred Aussies will develop prick ears as adults. For owners whose dog is a show dog or a working dog, this may be problematic and can usually be resolved with taping or gluing the ear when the dog is a puppy in order to ensure a proper ear set.

Genetically if your Aussies parent has rose or button ears it’s likely your dog won’t have prick ears, but it is still possible. It is thought that the prick ear is a recessive gene and so even if neither parent has ears that stand up it may still be possible, though unlikely for them to have puppies that do.

Also if you choose to glue or tape your puppy’s ears then you may never know their natural ear set which could be upright pointy ears or could be the rose or button ear after all.

Floppy ears on an Aussie is when the ears don’t stand up at all they flop all the way down and completely cover the ear canal. It can be somewhat difficult to tell the difference between a floppy ear and a rose or button ear. Usually, floppy ears are set lower on the head than rose ears, they also have no noticeable folds.

The set of their ears is important because Australian Shepherds are bred to herd cattle and sheep. Their ears play an important part in the physical equipment they use to do their job. Having button or rose ears provides the perfect balance of protecting their inner ear but still allowing them to hear properly.

A dog with prick or erect ears would be at risk for getting debris in their ear canal while working, and a dog with droopy or floppy ears will have slightly less auditory abilities as the sound will be a bit more muffled for them.

How to Set (Glue/ Tape) your Aussies Ears

There are many opinions on the topic of gluing or taping an Aussie’s ears.  For most owners who have an Aussie as a pet, the set of the ears really doesn’t matter too much.

If you are planning to have your Australian Shepherd become a show dog, or you like the ascetic look of the proper Rose ear that is typical with a show Aussie then you may have a desire to prevent floppy or erect ears in your Aussie.

There are many methods that owners use to set their dog’s ears. Some include using glue like this one to glue the ears into the proper position.

If done correctly it is not harmful to your dog, and the glue isn’t hard to wash out of your dog’s coat.

If you plan on gluing or taping your dog’s ears to make sure that they have the desired look it is recommended that you start when the ears begin to change possibly because of teething (see below) or growing. This is generally around 10-12 weeks but can be up to 18 or 19 weeks of age.

If only one ear seems to be going out of place you can just glue the one instead of both of them. These two videos below will give you a demonstration of both the taping and gluing methods.

Here is the video on how to glue an Aussies ears.

Generally, you won’t know 100% what your Aussies ear type will be until after your dog is finished teething. Teething is such a strenuous process on dogs that it can affect your Aussies ear position causing them to do all sorts of interesting things.

Chewing is thought to be the main cause of your Aussies ear positions changing. As your dog exercises its jaw muscles the muscles in the ears which are connected get exercise as well. Generally, this causes a dog’s ears to become more floppy. This may mean that a dog with mostly floppy ears may have ears that stand back up after teething.

Sometimes teething will cause your puppy’s ears to do different things. One ear may be floppy while the other ear stands straight up. Some Aussie owners have even observed their dog’s ears turning inside out during teething.

What do Aussie’s Ear Positions Mean?

Ear position can tell us a lot about how our dogs are feeling. Aussies specifically have very unique communication signals that often involve the ears.

As an Australian Shepherd’s ears gain more cartilage and begin to set in their regular position they will become very expressive. By being able to move their ears in certain ways they not only can pick up on certain sounds but are also able to inform their owners of what they are feeling.

Some common communication signals that Aussies may use are:

Your Aussie may indicate their emotions and feelings by placing their ears in multiple positions to show what they are feeling. Although, each Australian Shepherd is different and you must learn what your own Aussie is communicating to you.

Having good grooming habits with your Aussie can help you spot problems early on before they become extreme or out of control.

If you are interested in learning more about how other owners keep their Aussies well-groomed. Check out these articles.

How To Clean My Australian Shepherd’s Ears

Aussies are less likely than other breeds to obtain ear infections due to their perky ears that promote good airflow throughout the ear canal; however, there are still opportunities for issues such as ear mites and inflammatory problems.

You may be able to tell when your Aussie needs their ears cleaned. A healthy ear should be light pink with no smell and little wax if any. If you notice a strange color, a mild odor, or see that your dog is scratching its ears or shaking its head, it may be time to clean its ears. It is a good idea to ask your vet how often you should be cleaning your Aussie’s ears because each dog differs.

You may also want to check your Aussie’s ears often for:

Causes of ear infections in Aussies:

Aussies are prone to a skin allergy called “atopy,” where the ears are heavily affected. Symptoms typically start around 1–3 years old and can get worse every year. You may notice your Aussie licking their paws, rubbing their face, or developing ear infections more often. There are many treatment options available for atopy and it is normally easily treatable!

You may also notice your Aussie cannot hear as well as usual and is perhaps dizzy or nauseous. If you begin seeing any of these symptoms it is recommended for you to get your Aussie to the vet right away.

Some signs that your Aussie’s ear infection has been left too long include symptoms of: 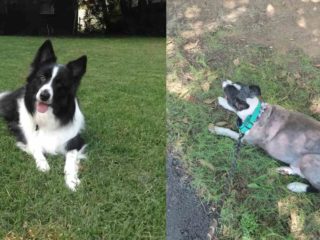 Shaving Your Border Collie (Is It Ever Ok?)
← Read Last Post 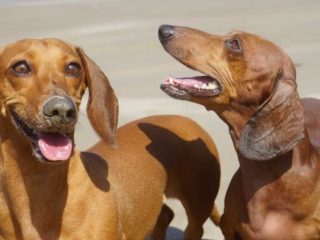