I don’t know about you, but when I look at a Pomeranian I tend to see a little ball of fluff! All that fluffiness sometimes looks like a lifesized cotton ball.

Not only does their thick fluffy fur make them absolutely adorable, but it is also important for their overall well-being and way of living.

Because Pomeranians are known for having this amazing fur, owners oftentimes become concerned when their Pomeranian isn’t as fluffy as others of the same breed; there are many different reasons why this could be happening.

If your Pomeranian is not fluffy, this may be occurring from several common causes including the dog’s genetics, possible health issues, current grooming methods, or their age!

If you are interested in learning more about why your Pomeranian might not be as fluffy as others, and why this is, then keep reading!

What Makes a Pomeranian Fluffy?

Before we dive into why a Pomeranian is not fluffy/is becoming less fluffy, let’s begin with why they are fluffy in the first place! It is important to know why Pomeranians have their unique, fluffy white fur.

The main reason Pomeranians are fluffy is because of their double coat! This coat not only makes them look adorable but helps them maintain their body temperature in different climates.

Normally all Pomeranians are born with fluffy fur and some owners even notice as their dogs get older, their coat becomes even fluffier! This happens because Poms will typically grow more hair as they reach older ages.

Having thick, double-coat and fluffy fur is crucial to the Pomeranian breed seeing as they were originally bred for pulling sleds and herding in the colder parts of Germany and Poland, which is where this breed originated.

There are also many other aspects that make Pomeranians have fluffy fur including genetics, grooming methods, etc.

NOTE: Even if only one of your dog’s parents doesn’t have fluffy fur, your dog could still inherit less fluff as well.

Why are Some Pomeranians Fluffier Than Others?

Like all other dog breeds, there are small differences between each individual dog. For Pomeranians, some dogs’ fur may be fluffier than others, but why is this?

Most often, Pomeranians that appear less fluffy than others generally look this way because of their genetics, the weather they live in, or simply the way they are being groomed.

As mentioned above, if your dog’s parents have thinner/less fluffy fur, it is likely that your dog will develop this too!

Some less fluffy-haired dog breeds that Pomeranians are often mixed with include:

It is important to remember that along with genetics, Pomeranians also go through different hair growth cycles.

If you notice that your dog doesn’t seem as fluffy as others, it may be because it has not reached the phase in its hair growth when the fur becomes fluffy (this usually happens at around 4 months old)!

TIP: Don’t worry if your Pomeranian puppy doesn’t seem as fluffy as other Pomeranians, your dog will eventually get to that fluffy stage as well!

Weather can also be a major factor in how fluffy a Pomeranian is. Most dogs are able to adapt to different climates because of their fur, especially if they are double-coated, the same goes for Pomeranians.

Seeing as they are sledding dogs and originally bred to be in very cold weather, their double coat and fluffy white & tan fur were made for being in the snow and cold climates.

However, they are still able to live in hot climates as well! If you own a Pomeranian, you have probably realized that they shed more along with seasonal changes.

You may also notice that their fur begins to thin out naturally when they are in warmer environments. This happens in order to ensure that the dog doesn’t overheat!

Because the fur does get thinner in the warmer weather, this could cause your dog to look less fluffy than other Poms who live in colder climates.

NOTE: Pomeranians naturally shed twice a year, if you notice your dog is less fluffy, it may have simply shed faster than other dogs you may see.

As for colder weather, Pomeranians typically gain more fur and fluffiness; however, if the weather is extremely dry, it could have the opposite effect.

Sometimes Pomeranians who are in extremely cold, dry environments will have more brittle fur that is likely to fall out because of the harsh weather.

Lastly, Grooming is one of the most popular ways that owners/groomers get a Pomeranians fluffy fur looking great!

This is typically another reason why some Pomeranians will look more fluff than others, they simply have great, well-taken-care-of, fur!

There are many different ways to groom a Pomeranian to make them look as fluffy as possible; sometimes owners who notice their dog not looking fluffy can fix this by simply trying different grooming methods.

We will talk more later on in this article about grooming methods that will make your Pomeranian extra fluffy, keep reading to learn more!

Why is My Pomeranian Not Fluffy?

There are also many, more serious issues, that can lead to a Pomeranian fur falling out or becoming thin/less fluffy.

The most common reasons Pomeranians lose their fur, or they slowly become less fluffy, is because of underlying health issues, old age, medications, and certain grooming methods.

Let’s break down each situation that can cause Pomeranian’s beautiful fur to become thin or less fluffy.

The two most common health problems that Pomeranians are prone to include hypothyroidism and diabetes; both of these can lead to dry/brittle hair that falls out.

NOTE: If your Pomeranian has diabetes, you may notice their fur falling out in clumps.

There are also other health problems that can affect your dog’s fur, Pomeranians tend to struggle with these health issues the most:

If you notice your Pomeranian losing a lot of fur or becoming less and less fluffy (especially very suddenly), this may be a sign that there is an underlying health condition. It is best to visit a vet to rule out any health problems causing the loss of fur.

As mentioned previously in this article, some Pomeranian owners notice that their dog actually gains more fur as they grow older.

However, like most dog breeds, as Pomeranians get older, they can also begin to lose more fur. This will make them appear less fluffy than they were when they were puppies.

Don’t be worried if you notice your dog’s coat thinning out because of their age, normally there are no underlying health issues, they are simply just getting older!

Medications go hand in hand with health issues. A lot of the medications prescribed for the health problems listed above will cause hair thinning and hair loss.

It is important that if your Pom must take medications that cause these symptoms, you maintain their diet and exercise so that they can stay the healthiest they can possibly be!

While grooming can make a Pomeranian look extra fluffy, it can also be the cause of a Pomeranian’s fur looking thinned out, or in rare cases, even causing the fur to fall out.

It is important to ensure that you are using the best grooming tools for your Pomeranian and its fur. If you are too harsh on the dog’s hair, it may cause extreme damage or breakage to the hair.

PRO TIP: If you are interested in the best grooming tools for your dog, you can find them by clicking here now!

If you are blow-drying your Pomeranian with a brush meant to slick the hair down, this will not help with the fluffy look you are trying to achieve.

It is also important not to use products that weigh the hair down or that strip the hair of its natural oils; this is key in making sure that your Pomeranian keeps its fluffy look.

If your Pomeranian is not fluffy, there are products that can help with this too, as well as different diets and foods that will help the overall look, feel, and fluff of the fur!

How Can I Make My Pomeranian Fluffier?

One of the main goals of Pomeranian owners is for their dog(s) to look great! This is usually easy to do with a Pomeranian who normally has a lot of fluffy fur; however, for dogs with less fur, or thin fur, this can be a struggle.

There are many ways that you can make your Pomeranian fur look fluffier, the two most important are making diet changes and using certain grooming techniques!

Diet plays an important role in the overall health of a Pomeranian. If their health is in bad shape, it is likely that their fur will be too.

Diet can help a Pomeranian’s fur grow and look fluffy. Here are some of the most common foods that Pomeranian owners have given their dogs, and seen results in fur growth/fluff:

Vitamins and oils are also very helpful in getting a Pomeranian fur looking great! Here are some of the most beneficial vitamins and oils for getting/maintaining fluffy fur:

PRO TIP: You can even try giving your Pomeranian a unique bath that can help with their fur health! Two popular methods are bathing the dog in oatmeal and corn starch baths.

One of the most popular grooming methods is the back brushing technique. This method is when you brush from the tip of the tail towards the head instead of the opposite way like normal.

This creates a teased effect and can make the fur look way fluffier than normal!

NOTE: While this method does work, it is important to make sure you aren’t hurting your dog or being too rough, this could cause more harm than good and even damage the hair if done wrong.

Why is My Pomeranian Tail Not Fluffy?

A Pomeranian fluffy tail is one of its most commonly known characteristics. If you are concerned because your Pomeranian tail isn’t fluffy, there are tail-specific grooming techniques that can be used to help!

If your Pomeranian tail isn’t fluffy, it is probably because it has naturally fine hair (often caused by genetics), or is experiencing hair loss. One of the easiest ways to get your dog’s tail looking fluffier is to use the right grooming techniques!

One grooming method that seems to work the best when trying to fluff a Pomeranian tail is the back brushing technique mentioned previously. This helps the fur fluff up and can make even a thin-haired tail look fluffy.

Hair loss on a Pomeranian tail is unfortunately something that a lot of Poms will have; however, there is typically a reason why this happens.

Here are some of the most common reasons why Pomeranians will begin losing hair on their tails:

Read These Next: (All About Pomeranian Grooming, Bathing, and Tails!) 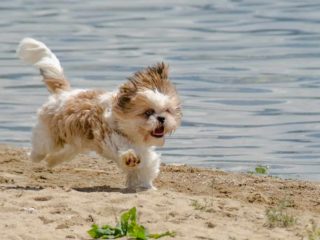 When Do Shih Tzus Calm Down? (Fix it Now!)
← Read Last Post 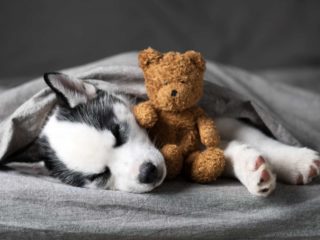