What States are Akitas Banned In (With Links to State Laws)

If you have ever owned an Akita, you know that they are very loving and loyal dogs. It is oftentimes shocking for people to learn that Akitas are one of the most banned breeds in the United States, but why is this?

Akitas are either completely banned or placed under heavy restrictions in many U.S States. This breed is typically banned solely because of its reputation for being aggressive.

There are many other countries that ban or place dog laws upon the Akita breed, if you are interested in learning more about why this breed faces these bans and restrictions, keep reading!

Why Are Akitas Aggressive?

Before diving deeper into the specifics of why Akitas are banned in certain states, let’s talk about why they are considered aggressive in the first place.

There are many reasons why Akitas are considered aggressive including their behaviors, reactions/resistance to training, history as a breed, etc.

Since Akitas are known to be very independent and are typically the leader of a group, it may be difficult to train them, this is why it is important to start training an Akita early to show them that you are in charge and are the leader instead.

NOTE: Training your Akita might take a lot of instruction repetition (20 + repetitions) for them to finally understand a basic instruction.

Practicing and training regularly is key in ensuring that your Akita does not grow up to have aggressive behavior. If practice is not kept up regularly, your Akita may forget the skills they have learned and risk becoming aggressive.

Even if your Akita’s training is going well and they are behaving great, it is important to put these skills to the test in a social environment with the person who has trained the dog.

An Akita may train well and do the commands perfectly when with the owner, or person training them is present, but act completely different when faced with a social situation, or a situation where they are not with a trusted owner, trainer, etc.

TIP: Starting training early in life can not only eliminate an Akita’s aggression later on in life but also help them handle stressful and social situations way better in general!

Aggression typically occurs in Akitas because of their upbringing, environment, and lack of socialization. Typically, Akitas who are brought up in a safe, calm environment and are trained and socialized early have no problem with aggression throughout their lives.

One of the main reasons Akitas are often deemed aggressive by the public is because of their physical characteristics, even if they have never, or will never attack or be aggressive.

The breed looks this way because of its significant height, weight, and stature. They typically stand between 24—26 inches tall and weigh between 70–130 pounds when fully grown.

The Akita breed has a very broad and muscular body, which can sometimes make them appear intimidating. Their ears also stand up straight which makes them look extra alert, and sometimes anxious or scared.

There are different types of Akitas including the American and Japanese Akita. These two dogs are pretty much identical except the American Akita will oftentimes stand taller and have larger features, this makes them appear more threatening than the Japanese Akita.

NOTE: A lot of U.S laws and regulations apply to the American Akita, specifically, although the two dogs’ temperaments are the same.

What are Dog Ban Laws/Regulations?

A lot of people who own dogs throughout the world are unaware that there are certain laws and regulations in place regarding their dog that may be specific to their country, state, region, town, etc.

Dog ban laws are rules, regulations, and laws that are put in place to ensure that you, your dog, and the community stay safe.

There can be dog laws for many things including rabies, barking, vaccinations, pet waste, licenses, pets on leashes, etc.

Dogs that are considered aggressive, like the Akita breed are, unfortunately at a higher risk for consequences if an incident occurs in an area with strict dog laws, or breed-specific laws/regulations.

An Akita can face backlash and consequences solely because they are known to be aggressive, even if they have not done anything that breaks the laws, regulations, etc.

There are minor to severe consequences for breaking dog laws. Some states require euthanasia for certain incidents, especially dog attacks; however, other states have laws that protect dogs, even if they are the ones who attack.

Why Do Akitas Attack?

Just like many other dog breeds, Akitas are known for attacking when they are overrun with emotions.

Akitas attack when they are stressed, scared, etc. They believe that they need to protect themselves or their owners.

Akitas are known to hide their emotions well. This is why it seems sudden when an Akita attacks. They are known to attack most after or when being provoked by another dog or human.

Many dog breeds are known to bark, growl, etc. before attacking, while an Akita keeps calm and collected, bursting out with aggression in what seems to be a sudden attack.

Akitas are a very loyal breed who feel that they need to protect their owner. This causes them to sometimes become aggressive even when there is no immediate threat present.

Since Akitas were originally hunting and guard dogs, they tend to show this aggressive behavior more quickly than some other breeds.

NOTE: Akitas are known to be specifically aggressive towards other dogs (especially those of the same sex), not so much towards cats, humans, or other types of animals.

Are Akitas Banned in the United States?

A lot of people interested in owning an Akita are curious whether or not their dog will be banned in certain areas of the United States.

Because Akitas are known to be aggressive, they are banned completely in some U.S states or placed under strict dog laws. There are currently 42 states that have dog regulations or laws in place.

These dog laws are in place for many reasons but one of the most important is if a dog would attack in a state with these laws, there would be stronger consequences for both the dog and its owner versus a state without bans and laws.

While some states completely ban Akitas or ban them in certain cities within the state, there are locations that require other measures to be taken instead of completely banishing the breed.

Some of these requirements and laws include:

🐾 The dog wearing a safe muzzle
🐾 Signage present in yards and on doors
🐾 Warning on the leash/collar that the dog is wearing to indicate that the dog is dangerous,
🐾 Having a license or liability insurance, etc.

There are also some extreme measures that certain states will go to including:

🐾 Mandatory neutering or microchipping the dog.

Here are some of the U.S states that have cities that ban or place restrictions on Akitas specifically:

There are also some states that have laws and bans placed on dogs solely because of their size and nothing to do with what breed they are.

NOTE: A lot of these laws, if violated, result in penalties If an owner doesn’t control their dog or meet the conditions set in place.
The best way to find out what the laws in your state and county are would be to look on your state government website.

There are a lot of U.S states that ban or regulate Akitas; however, this doesn’t just apply to the United States, there are other countries that place bans and regulations on this breed as well. Some of these countries include:

Are Akitas Banned by the AKC?

People who own or are planning to own an Akita may be concerned about whether or not their dog breed is included in the American Kennel Club (AKC) since the breed is one of the most banned breeds throughout the world.

Akitas are not banned by the AKC, they were recognized first in 1972 and have consistently maintained their popularity among dog owners since then.

There are several requirements set in place by the AKC to ensure that a breed can be registered. One of the most important requirements is there has to be a certain number of the specific breed present within the United States and also a significant amount of people/dog owners who are interested in the breed.

Akitas are part of the AKC working group. Since they are so loyal, they are oftentimes used as therapy dogs who visit schools, hospitals, nursing homes, etc.

When trained properly and socialized, Akitas can be great dogs! Unfortunately, their reputation and physical characteristics are what give people the impression that they are aggressive.

How Can I Make my Akita Less Aggressive?

A lot of Akita owners whose dog(s) have shown aggression, or those that worry their dog might show aggression in the future, are oftentimes concerned that there is nothing that can be done; however, this is not the case!

There are many steps that can be taken to ensure that your Akita does not become aggressive including proper training, positive rewards (like treats!), and playing/exercise.

It is important to remember that you know your dog best. If you notice that they show aggressive behavior only in certain situations, then you will know what to work on with your dog, and what specific situations to avoid.

NOTE: As an owner, it is important to know what makes your Akita uncomfortable enough to show aggression, and what doesn’t.

A dog’s owner is oftentimes who they trust the most, this is why it is important to build a strong relationship and keep that relationship throughout your Akita’s life.

Owners that use positive methods to train or redirect their Akitas will typically have a better chance of their dog not being aggressive versus those who use negative training methods and behavior.

Since Akitas typically become aggressive in stressful or uncomfortable environments, it is important to always provide your Akita with comfort.

By living in a happy and healthy environment, dogs are not threatened and don’t feel as if they need to be in attack mode at all times or to even show aggression at all.

TIP: It is important to be in tune with your Akita’s behaviors and body language. If you notice they are in a stressful situation or a social setting that is causing them anxiety, you can remove them before they get the chance to become aggressive and take them to a calmer place.

Should I Own an Akita if They Are an Aggressive Breed?

Oftentimes dog lovers will debate whether or not they should get an Akita since they do have a reputation for being aggressive.

If you are interested in owning an Akita, go for it! However, it is very important that they are trained and socialized from the beginning, if you do these two things, chances are your Akita will not ever become aggressive!

Since some people are so hesitant to own an Akita, there are several measures to take before going forward with owning this breed, here are a couple of things to keep in mind when considering owning an Akita:

TIP: If you don’t know where to find a good dog trainer, check out the AKC’s Training Club map to find a trainer/training club near you: American Kennel Club – Obedience Training Club Search

Read these next: (Everything you need to know about Akitas!)

Are Akitas Prone to Separation Anxiety? (What to do) 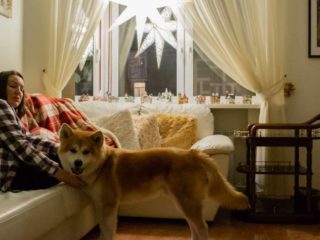 Are Akitas Prone to Separation Anxiety? (What to Do)
← Read Last Post 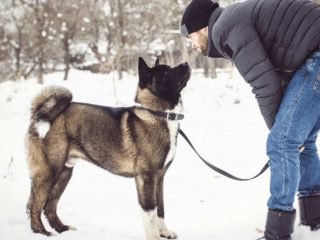 7 Reasons Why your Husky Follows you Everywhere!
Read Next Post →