If you are familiar with Australian Shepherds, you know that they are some of the most loving, devoted, and intelligent dog breeds around! They are oftentimes known for their adorable ears and unique fur colors!

There are so many different color patterns in Australian shepherd’s coats it can be quite confusing to know what it all means. In this article, we will talk about how to tell when an Australian Shepherd is mismarked or double merle and what causes it as well as a quick overview of the different fur patterns that Aussies are likely to have!

What is a Double Merle Australian Shepherd?

A double merle Aussie happens when two merle Aussies are bred together and the puppy inherits two dominant M (Merle) genes. This causes the dog to have an extreme lack of pigment in its skin and hair which presents as a very white dog.

A double Merle Aussie will have mostly white hair and pink skin underneath. There may be small patches of color in its fur, but it will very obviously be lacking the normal Australian Shepherd fur coloring.

Double merle dogs often have many health problems specifically with vision and hearing (discussed below).

Aussie breeders should never breed two merle dogs together because there is always a 25% chance that a puppy will be born double merle. That means if a merle is bred with another merle and has a litter of 4 puppies the chances of having a double merle are very high.

The danger with having a double merle puppy is that it is much more likely to have auditory and vision problems. In extreme cases double merles can be deaf and blind.

The merle gene causes changes in the cells that affect pigment or coloring in an Aussie. Specifically it prevents pigment or color from forming in the hair, eyes, and ears of the dog.

The areas of the fur which are affected by this lighting or lack of pigment are always random depending on how the gene presents. This is why Merle dogs are always so beautiful and unique in their coloring.

The problem with this is that when a dog gets two merle genes it can have damaging affects on the pigment cells formed in the eyes and inner ears. When these cells don’t form properly while the dog is an embryo then its hearing and its eye sight will suffer.

There isn’t any current scientific evidence that other health problems exist specifically for double merle dogs, but having a dog that is visually and hearing impaired can be very challenging.

What is Cryptic Merle?

A cryptic merle, sometimes called a phantom merle has the genes of a double merle Australian Shepherd but doesn’t have the physical markers of an all or mostly white coat like other double merle dogs generally do.

Physically the dog looks like a bi-colored Aussie, but genetically it still has the merle (M) gene. This means it can still pass this gene on to its offspring. If bred with a known merle dog there is a good chance one of the puppies will be born as a double merle dog.

Not all double Merle dogs will have excessive white fur. Because of the way this gene works it can sometimes ‘hide’ in an Aussie that looks like a solid coat color. It can be a solid black coat or a red (liver) coat.

A simple watered down explanation is that the gene works by adding a bit of extra code. When it doesn’t add a lot of that extra code, which sometimes happens, the dog can look like a normal Aussie but still have the gene. When it does add a lot of code then it looks like the white-coated double merle and usually has hearing and vision problems.

How to Know if you Have a Double Merle Aussie

A genetic test is the only way to be 100% certain that your dog is a double merle, but If you have an Australian Shepherd that has a predominantly white coat, as well as hearing or vision problems it is likely a double merle.

Not all double merles will present with the same physical characteristics that we have been describing. This is why it’s important to get Aussies from a reputable breeder that takes breeding healthy dogs seriously.

Tip: This is the best DNA kit that we recommend for testing to find out if your dog is a double merle or not.

What is a Mismarked Australian Shepherd?

Some Australian Shepherds that are not completely white will still have a significant amount of white or other strange colorings that might be confused as a double merle when in fact they are just considered to be mismarked.

An Australian Shepherd is considered mismarked when the dog has any colorings or markings that are outside of the desired boundaries on the body, such as excessive white on the chest, face, ears, head.

Mismarked can happen for many different reasons. There are a lot of different genes that can affect Australian shepherd coloring. Being mismarked doesn’t necessarily mean that the dog has the double merle gene.

Acceptable Australian shepherd coloring according to the AKC includes:

Tan markings as well as white markings in the acceptable areas are accepted by the AKC when registering an Aussie.

While Aussies will oftentimes have some white fur in splotches across their bodies, it is unlikely that they will have a significant amount of it, especially within those previously mentioned areas on their bodies.

Note: Just because your Aussie has mismarking, does not mean that they will have health issues, while this is known to occur, it does not happen to all mismarked Aussies!

What Causes an Australian Shepherd to be Mismarked?

Like a lot of other dog breeds, genetics play a major role in determining what an Australian Shepherd will look like, what their fur will be like, and many other factors such as their health.

Australian Shepherds develop mismark solely from genetics. The gene that causes mismarked is called the “piebald spotting gene.” This gene causes the white fur to develop in undesired areas.

The mismark gene usually occurs due to overbreeding. Although, Aussies that are bred responsibly have been known to develop the gene that causes mismarked fur color.

It is not recommended to breed a mismarked Australian Shepherd because the likeliness that the puppies will develop the mismark gene becomes very high, also making it more likely for the pups to develop health issues too.

Note: The Irish spotting gene is very common among Australian Shepherds (white markings will occur on the underside of the dog and around the collar area).

While mismarking is caused by genetics, Australian Shepherds are also likely to develop other fur colors which are caused by genetics too! One of the most common genes that Aussies will have is called the merle gene.

What Makes an Australian Shepherd Merle?

People who are familiar with Australian Shepherds know that they can have many varieties of coat colors ranging from solid to spotted. Some Aussie owners wonder why this is.

Merle dogs have a unique, spotted coat pattern that is caused by genetics. The merle gene not only affects the fur color, but also the pigment of the skin, specifically on areas of the body such as the paws, nose, and eyes!

Australian Shepherd genes cause them to develop one of two colors, either black or red. Their other genes, such as the merle gene, are what determine the pattern that an Aussie will have.

Merle coats aren’t rare for Aussies at all, they can have many different merle colors, the most common merle colors are blue merle and red merle. They are also known for having what is called a blue tricolor coat.

NOTE: A black Australian Shepherd that has a merle coat pattern is called a blue merle because the coat appears more blue than black!

Oftentimes white will be mixed in with merle or tricolors; however, this is not considered mismarked unless the white is occurring in large patches in undesired areas.

Red merle is rarer for Aussies than blue since the red gene is recessive and the blue gene is dominant. While a lot of Aussies develop the merle gene, the most common fur colors are the standard solid black, solid red, black tricolor, and red tricolor.

Note: If an Aussie is a tricolor, they are most likely to develop black, white, or red within their tricolor coat; although, they are known to have a copper tricolor coat too!

If you notice that your Australian Shepherd has a very unique, vibrant, and beautiful merle coat, they have likely developed the “Harlequin” gene. This gene causes an Aussie’s merle coat to appear even more beautiful than a traditional merle coat, usually with more color spotting and vibrancy that makes the fur look even more unique!

Standard Aussie fur colors, mismarking, and merle or harlequin coloring are not the only pigmentations that Aussies are prone to, they can also be dilute.

What is a Dilute Australian Shepherd?

Have you ever noticed that your Australian Shepherd’s fur is a lighter tone than other dogs? This is because they have the dilute gene!

The dilute gene causes the pigments of an Australian Shepherd’s fur to appear watered down or diluted. This makes their fur color appear washed out or lighter than it normally would.

The dilute gene can affect Aussies of all different colors; for example, if a blue merle Aussie develops the dilute gene, they will appear more slate blue in color rather than a darker blue. Their noses and other exposed skin may also appear slate blue — mismarked Aussies can be dilute too!

NOTE: Although Australian Shepherds can have different fur colors and patterns, their temperaments will stay the same! Aussies will still have their lovable, exciting personalities even if their coats appear different!

Read these next: All about Australian Shepherd Grooming! 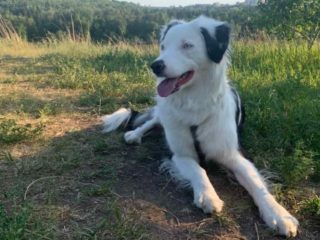 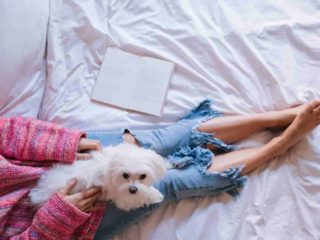