Australian Shepherds come in many different colors, but one of the most majestic and beautiful has to be the all black Australian Shepherd. With such a stark contrast compared to the other more vibrant colored variations of this energetic dog, it attracts many new owners with its unique all black solid coat.

Are all black Australian Shepherds rare?

Solid black Australian Shepherds are hard to find. Not impossible, but out of the many color variations, this is one of the rarer types. The black coat is caused by a recessive gene. All Black Aussies need two copies of this recessive gene in order to inherit an all-black coat.

How much is a black Australian Shepherd puppy?

Generally, the cost of a black Australian puppy ranges from about $500-$2000 dollars. The cost will depend greatly on the breeder.

Tip: A reputable breeder that takes care to test genetics and strives to breed healthy dogs will usually cost a little more. The extra cost is well worth it as you can avoid other health-related costs down the road.

In many cases, a Black Australian Shepherd puppy will be sold at a lower cost because their coats are generally considered to be unpopular.

Most owners find it too simple compared to the other colors and therefore might charge a lower price, despite their rarity. Remember to always do your research on reputable breeders before purchasing an Australian Shepherd, or any dog for that matter.

What are Black Australian Shepherds called?

Although there are many variations, they’re generally just called solid black Aussies. Unlike with a lot of other patterns, this Aussie’s description isn’t too complicated.

An all-black Aussie has the typical thick double layer of Aussie hair. It’s long and sleek and sheds year-round with an extra shedding twice a year (blowing its coat).

Its ears can be either rose (slightly bent like a petal), button (bent over halfway), or erect (standing straight up).

Finding an Australian Shepherd that is completely black is very rare. Generally, a black Aussie will still have a bit of white or color on its chest, paws, and chin. Even though black Aussies have these other markings they are still considered to be a solid color coat.

Australian Shepherds are very energetic, very smart, and very loyal dogs. They will need a lot of training and a lot of exercise.

Black Australian shepherds are very intelligent and will catch on to training very quickly, but they do need a lot of mental stimulation.

Tip: If you are wondering if an Aussie is the right dog for you. Check out this article First dog? Don’t get an Australian Shepherd unless….

Black Australian Shepherds just like all colors of Aussies are a herding breed and will love to move things around, whether that be cattle on a ranch, balls, small children, or cats.

Aussies are relatively low maintenance with grooming and care but do require consistent upkeep. Learning how to groom a beautiful all-black Aussie to keep their fur looking nice and shiny like black licorice can be very rewarding.

As most know, Aussie puppies all start out with striking blue eyes. After a couple of weeks, their eye color might shift to a darker color, or for some, stay the same.

The genetics of a blue-eyed Australian Shepherd surprisingly relies upon mostly coat colors. Aussies with a merle pattern are much more likely to keep their blue eyes even after puppyhood.

Sadly, however striking they are, most black Aussies do not share this trait with the merles. A black Aussie with blue eyes is incredibly difficult to find and to breed, and most dogs of this type have honey brown eyes or a darker color.

Have we convinced you? Aussies are sure a lot of work, but they’re worth it. Here are some names we think fit perfectly with this beautiful Aussie color!

Maybe you like the sound of these dogs, but you want something a little more adventurous. Not to worry! There are hundreds of Aussie mixes that are just as beautiful! Check out a couple of them in the list below.

The Tri black Aussies are one of the most common colors in the Australian Shepherd breed. These Aussies have white and brown hair on their bellies and faces, and this can often be confused with the similar Border Collie look. They also usually sport a secondary brown or light tan color around their face and legs.

Black Merles are another beautiful type of Australian Shepherd. With their oreo-like coat and dappled patterns they can sometimes get mistaken as Australian Cattle dogs.

Despite the name, they often have a patch of white hair on their chest, although not very much. These Aussies are still considered solid black.

Australian Shepherds may also have more of a dark brown tint to their coat and still count under this category.

These variations are also often mistaken for other breeds, like Newfoundlands or Border Collies of similar colors. 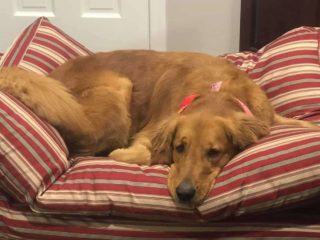 Giant Golden Retrievers (Why & Where Do They Come From?)
← Read Last Post 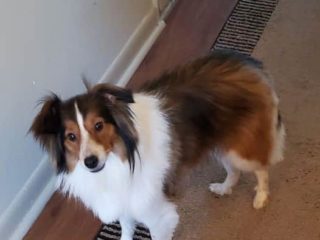