Poodle Wolf Mix, Is It Possible?

While doing some research for another article I’m working on I came across someone asking questions about a Poodle Wolf mix. I didn’t know the answers at the time, but I was intrigued! What would a Poodle Wolf Mix look like, and is it even possible, or sensible? I wanted to find out, so I’ve spent the last several months researching, and now I’m ready to share what I’ve learned with you.

It is possible to mix a poodle and a wolf, but not advisable. Poodles and Wolves have very different temperaments which can cause offspring to be very unpredictable and possibly dangerous. This mix can be difficult to socialize, and train. They can also have a lot of behavior problems.

In this article, we will explore all the known scientific data about Poodle Wolf Hybrids. We will also take a dive into owners’ experiences with their mixed breed that contains Poodle and Wolf.

What is a Poodle Wolf Mix?

A Poodle Wolf Mix or Puwo, simply put is a mix between a domesticated dog (poodle) and a wolf. This could include full-bred poodles and purebred wolves or it can include dogs who have DNA tests done and show portions of wolf and Poodle as well as other breeds.

Many people are fascinated with wolf-dog mixes. They have an innate beauty and wildness about them. Expert dog owners may want a challenge in training and raising a dog. Most people don’t fully understand the challenges that come with raising a wolfdog mix.

Poodle wolf mixes are no different. Even though a Poodle temperament seems to be the most preferred in the dog world as it has the most mixed breed of any other dog. A poodle temperament is not enough to calm down a wild wolf dog. Because these 2 temperaments are so opposite the mixing of the genetic data can work at odds with each other and make this dog neurotic and maladjusted.

In the 1970s a scientist named Eric Zimen decided he wanted to learn more about Poodle and Wolf behavior. He observed them both and made a lengthy list of the different characteristics that each breed displayed. Some behaviors were similar and some were very different.

The biggest difference between wolves and poodles is how they interact with humans. From the time they are young puppies, Zimen noticed there were significant differences. Poodle puppies tend to gravitate towards human interaction and contact while Wolf puppies seemed to be fearful of it.

Another big difference he noticed in Poodles and wolves was that wolves seemed to have many more facial expressions postures and positions. They were always surveying their surroundings with some measure of calculation while poodles were more aloof and free of worries and concerns.

Despite all these differences Zimen wanted to take his experiment even farther by breeding a purebred wolf and a purebred poodle together. Not only did he breed 1 pair together, but he ended up breeding several different full-bred poodles and full blood wolves so he could see what parent they might take after.

Zimens Poodles and wolves had multiple litters. He left some puppies with the wolf mother to be raised and took some puppies to raise and socialize in captivity. He found out that the wolves could be socialized, but their temperaments were still very unpredictable and had a very wide range.

The overall temperament for these mixes was unpredictable.

Next Zimen had the F1 (first generation) poodle wolf mixes mate. Here are what those puppies looked like.

The outcome of this generation of Poodle wolf mixes was quite shocking. They all looked and acted so differently. There was no way to predict what traits they would get from their parents. Many of the dogs were aggressive and very difficult to train.

Today it would be near impossible and fairly unethical to try and breed a purebred wolf with a Poodle. That doesn’t mean however that there aren’t dogs that have some poodle and some wolf in their DNA. Thanks to Embark a genetic testing company that is expert in helping you discover what DNA your dog has, owners are able to find out exactly what percent of their dog has wolf blood!

Do you think your dog has wolf blood in it? Order your own Embark DNA Kit here.

I reached out to wolf dog owners to see if any of their dogs have wolf and poodle and found a few that have low content wolf (low content means less than 50% pure wolf).

Here is a pup that has a Poodle for a dad, and a Husky Wolf Hybrid for a mom.

Both of these dogs have some poodle as well as wolf. The most popular standard breed dog to mix with wolf is usually husky as they seem to be most closely related genetically

Unfortunately, the light brown dog in the left of the picture above had a lot of behavior challenges that resulted in it being re-homed. His owner really struggled with trying to care for him. He could not be house trained. He was wary of new people, and had very neurotic behavior.

If you are wanting to get a dog that is a mix between Poodle and wolf think again. Not only will it be near impossible to find, but this type of dog also makes a poor choice as a family pet. Getting this kind of dog would be extremely challenging because of its unpredictable personality and temperament.

Next Up Read This:

Chihuahua Wolf Hybrid (Is It Possible?) 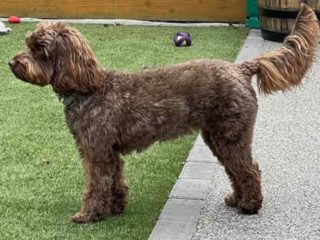 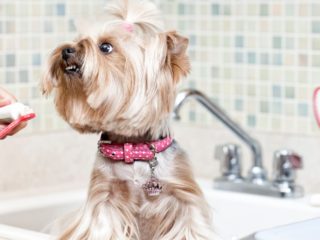