Getting A Second Dachshund! (What You Need To Know!)

Dachshunds are so lively and spunky they make any home a fun and exciting place! Maybe you are thinking that if having 1 Dachshund is so much fun why not have 2?

Adding a second Dachshunds to your home can sound like a great idea, but if you are seriously thinking of doing it, it’s best to plan ahead and know what to expect.

Your Dachshund could greatly benefit from having another dog in the house. Dogs are pack animals and are genetically drawn to be together. It is important that your Dachshund is well socialized first and you will need to choose the sex and breed of your additional pet carefully.

If your Dachshund is not well behaved and you are wanting to get him or her a companion because you think that will help them be less bored or destructive, think again! I’ll explain why that might just add to your problem instead of helping it. We’ll also learn about what the best companion for your Dachshund might be and how to introduce them to each other successfully.

Do Dachshunds Get Along with Other Dogs?

Generally, if your Dachshund is well trained and well socialized then yes it will get along well with other dogs. Because Dachshunds can sometimes be more high energy they get along better when paired with laid-back dog breeds who don’t mind your Dachshund being in charge.

If your Dachshund is possessive, has a lot of anxiety, or is not very well socialized it may not be a good idea to get another dog as a companion for your furry friend until you have been able to address all of these problems first.

You will still need to work on training and give the dogs a chance to get to know each other on neutral territory, but chances are they will mingle well and end up as best friends.

Something that you can do to test your Dachshund’s sociable nature would be to take them to a place that has a lot of other dogs and very closely monitor and observe how they react to other dogs. A good place to try this out could be Pet Smart, or perhaps a dog park. If they are inquisitive and want to be social and get to know other dogs without being aggressive at all that is a great sign that you can proceed to try and find them a companion.

Is your Dachshund Lonely?

Your Dachshund may be lonely if….

Even if your Dachshund is showing these behaviors and you feel it is in part because they are lonely and need a friend to be with, it’s important that you address these behaviors before you get another dog, or you might have two dogs that have these problems.

Why you Should Get another Dog for Your Dachshund

Dachshunds thrive on attention and socialization. They love nothing more than to play and be part of a pack! Getting another dog for your Dachshund to play with and grow up with can be a great idea for many reasons. Having a playmate can help your Dachshund from getting bored, and can take some of the pressure off of you to constantly entertain.

Having more than one Dachshund can be a lot of fun for you. I can picture the extra loves and snuggles I would get from having multiple little fur balls running around my house. Animals are so fun to watch and their antics are always entertaining. Just think about how many hours you can spend on YouTube watching cute dog videos.

If your Dachshund has separation anxiety and gets very lonely when you leave him alone getting him a companion to keep him company could be a great comfort and help to him.

Dachshunds aren’t a large breed so they do eat less when compared to larger dogs like Australian Shepherd or the rest of their doggy counterparts that adding another one really won’t be too much of an additional cost, although you do need to think about the cost of vet visits and possible grooming or training that you will need to invest in.

Why You Shouldn’t Get Another Dog for Your Dachshunds

If you are thinking of getting a friend for your Dachshund because your dog is bored and getting into a lot of trouble, think again! You shouldn’t get your Dachshund a companion dog if your Dachshund is already not well behaved.

Finding that tipped-over garbage can with chewed-up tissue, or food and treats hidden all over the house isn’t fun for any pet parent, but it will be double trouble if you add another puppy to the mix. You may think that he’s bored and his antics of getting into the garbage can or constantly barking at the neighbors indicate he needs a playmate, but that’s not necessarily true.

Making sure to well train your Dachshund now will make it a lot easier for you if you do add another pet down the line. Not only will your pet be better able to handle the new transition, but he will also be better equipped to help you train a new dog the right ways to do things.

A lot of Dachshund owners have had huge successes in joining this fun program for training their dogs.  Click here now to try this popular brain training for dogs course!

If you aren’t prepared to deal with the financial cost of another dog then you shouldn’t get one just for the sake of your Dachshund to have a friend. Vet visits, vaccinations, flea treatments, grooming, treats, and toys can all add up. You don’t want to feel like you need to get a second job to pay for a second pet, that kind of just defeats the purpose.

Do Dachshunds Get Along with Each Other

For the most part, Dachshunds get along well with each other and can really benefit from one another’s company.  Dachshunds have a pack mentality and are happy to rule the roost with each other, but beware, if you do get multiple J Dachshund you need to make sure that you are giving equal attention to them all so that jealousy doesn’t start to play a role in how they treat each other.

Training will be essential when having multiple Dachshunds and it could be a little tricky to train your new puppy with your senior dog around watching you give all the attention to the newest member of your family.

Pro Tip: Take your Dachshund with you to meet other dogs to get a good read on how well your dog will get along with a potential housemate.

What Else You Should Consider With Multiple Dachshunds.

Some of these problems include fearfulness, anxiety, difficulty training, and fighting amongst the two dogs. I don’t know about you, but I get enough arguing with my kids, I don’t need fighting puppies to go with it!

You also need to consider the age of your Dachshund, if you have a very senior Dog then they might not have the energy or desire to keep up with a new puppy. Yet some studies show that having a senior dog and getting a puppy can be good for your older dog. It can keep them more fit and active. The puppy may also accept the older dog as the Alpha as well.

What about just getting 2 puppies at the same time? Double the cuteness right! Well, that may work out ok in the long run, but if you haven’t had experience with taking care of and training a puppy I would suggest you start with one. Having one puppy is a lot of work! Two puppies to care for and train at the same time is downright exhausting!

So when is the best time to introduce another puppy to your household? Most behaviorists recommend waiting at least a year before adding a playmate. A new puppy will mirror the behavior of your already established Dachshund, the good and the bad.

So if you have at least a year to do some significant training that will give your Dachshund a good strong foundation of training and socialization they’ll be ready to help your train the new recruit, which in the long run will make adding another one less work for you.

With Dachshunds like most other dogs, opposites attract! If you have a male Dachshund then you should try to get a female, if you have a female then a male could be a good match. There is usually less competition for alpha status between the sexes than if they were the same gender. Of course, remember that you’ll end up with a litter of puppies if one of your Dachshunds isn’t fixed. 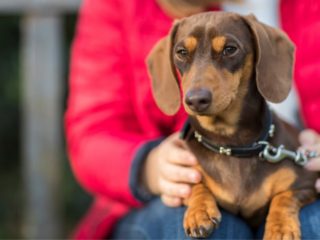 Are Dachshunds Jealous Dogs? (What to Do)
← Read Last Post 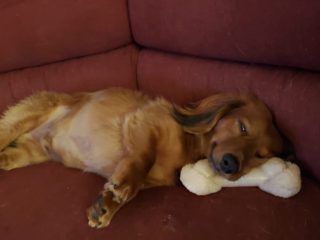