Everything to know about your Goldendoodles Tail, (Docked, Length, Style)

A tail can tell us so much about our dog, they are a very beautiful and important trait on our lively Goldendoodles. But what is it about the tail that makes it so special? How do we know if our Goldendoodle has a normal tail, or if something may be off or different? Should a Goldendoodles tail be docked? What is the best way to groom and style your doodles tail. How do you know if they have limber tail (swimmers tail) and what to do about it!

I was curious about this too so I took some time to Paws and Learn so I could find all the answers to every question you could have about your Goldendoodles tail. I’ve done my research and talked to a lot of Goldendoodle owners and vets so you can have all the answers in one place.

Do Goldendoodles have tails, what should they look like?

Goldendoodles naturally have long fluffy tails, because they are mixed between a Poodle and a Golden retriever the look of Goldendoodles tails can vary depending on which breed it favors.

How long are Goldendoodle tails?

Goldendoodle Tails are on average are 12 to 14 inches long however it is not uncommon for Goldendoodles to have tails ranging from 3.5 inches all the way to 16 inches long.

Normally Goldendoodle tails don’t curl. A curly tail may be considered a flaw in genetics as according to the AKC both Poodles and Golden Retrievers have a strict standard for how a tail should look. For both breeds, it should be erect and held behind the dog’s hocks not curled at all.

For Poodles, the AKC standard states that the tip of the tail, when erect, should be at the same height as the top of the dog’s head. Around, 1/4 to 1/3 of the end of the tail is docked. Depending on the size of the poodle (mini, toy, or standard) the tail length will be different.

For Golden Retrievers, their tail should be the correct length extending to the hock but never below. When the dog is relaxed, the tail hangs down naturally, it does not curl.

Do Goldendoodles get their tails docked?

Occasionally a breeder who has worked a lot with poodles may follow the poodle breed standard and dock the tails or their Goldendoodle litter, but it’s really not necessary.

These two beautiful pups had their tails docked as puppies by a breeder that follows the AKC industry standard for tail docking poodles and had decided to do that for their Goldendoodle litter as well.

How To Achieve the Look: Two–thirds of the tail, starting at the base, is trimmed closely, with a long plume of hair left at the end. If you arch the tail over the dog’s back, the spot where the tail begins to bend is approximately where the plume should begin.

Good For: A more traditional Poodle type look. Owners I talked to also said that they prefer this style for easy grooming as there is less hair at the end of the tail to get tangled and less of a chance for the hair to get stepped on or stuck in something.

How To Achieve the Look: This is a fun look that is named as such because it looks like the outline of a flag. The base of the tail and around the anus is cut short for the first 2-3 inches then the rest of the tail is trimmed into a rectangle shape.

Good For: Owners who like a nice neat look but still enjoy the beautiful natural look as well. This style needs to be brushed out at least once a week to keep mats from forming.

How To Achieve the Look: This look is mostly left natural except that it is trimmed up a little around the anus and trimmed just enough to straighten up the edges, but not in a set rectangle shape like the flag style.

Good For: Owners that like a natural look but prefer to have it trimmed up just a bit to look more neat and tidy. This look needs to be brushed 2-3 times a week.

Long and Fluffy (all Natural)

How To Achieve the Look: Do nothing as far as trimming or cutting goes. This look is meant to be all-natural showcasing the original beauty of your gorgeous doodle. You will need to spend some extra time brushing and keeping this tail mat and tangle-free.

Good For: Owners who love the all-natural look and long billowy tail of their Goldendoodles. It’s great for owners who don’t want to take their dogs to the groomers as often but requires at least 2-3 times a week of brushing if not daily in order to keep it free from mats and bugs.

How To Achieve the Look: Neat and trimmed short in the same style as the rest of the body the hair can be anywhere from 2-4 inches long and is the same length through the entire tail.

Good For: Owners who are very active and don’t want the hair to get caught or pulled on anything. Also good for owners who don’t want to spend as much time brushing the tail out multiple times a week. It will still require brushing about once a week but should be quick and easy.

How to Groom A Goldendoodle Tail

Depending on the cut you choose for your doodle will determine how you cut it, but for a lot of owners part of the charm of having this beautiful breed is the gorgeous plume flowing from their rear end. This does require daily or at the least bi-weekly brushing.

If you plan on trimming or grooming your Goldendoodles hair yourself then it’s very important to have good high-quality tools to use. This scissor kit is a great place to start and can help you get the high-quality look you are going for.

Here is a great Video Overview on trimming a Goldendoodles tail.

Goldendoodles wag their tails for many different reasons. It’s a big part of how they communicate with you. Wagging their tail doesn’t always mean they are happy. They could be conveying other emotions like nervousness or fear as well. The key to understanding their tail wags is to put it together with all the other contextual clues they are giving you. What are their ears doing, their eyes, how is their posture? Noticing these things as well will help you know why your Goldendoodle is wagging its tail.

Here are some things your Goldendoodle could be communicating to you with its tail.

For most Goldendoodles wagging their tails to communicate is a natural and normal thing for them to do. Occasionally you will find a Goldendoodle that doesn’t wag its tail at all. Don’t worry, you are not alone.

If your Goldendoodle doesn’t wag their tail it’s most likely just part of their personality or genes. It could also be that they have an extra curly or short tail that makes it more difficult for them to wag, but it could also indicate a medical problem and they should be seen by your vet to rule out any serious issues.

If your Goldendoodle has recently stopped wagging its tail then there are some other things your should consider. If you have just moved, or they are new to your home this could just mean they are nervous and need some time to get acclimated to their new environment.

Some dogs are bigger tail-waggers than others. If your Goldendoodle doesn’t wag its tail at all then you will have to learn to identify other body language cues to help you understand what they are trying to tell you.

Other Tips for Goldendoodle Tail Problems

What is Limber (Swimmers) Tail and What to Do

If you notice your Goldendoodles tail hanging down and it looks limp and unnatural then he may have a condition known as Limber Tail.

Limber tail Also known as swimmers tail, frozen tail, dead tail, broken wag, or cold tail is a condition that causes your dog to hold his tail limp and down instead of the usual upright position. Its official name is Acute Caudal Myopathy.

It is most likely to happen after your dog has had very active or strenuous play, exercise, or excessive tail wagging. Sometimes a lot of swimming can cause it, being in cold wet weather, if they are confined to their crate too long, or if your doodles tail is wagging and getting whacked on various surfaces.

This could cause your dog pain and swelling in their tail, making it difficult to sit. Usually, this condition will go away on its own after a few days of rest. It’s important to try and limit exercise and movement if you notice that your dog is experiencing this problem. If it is causing your doodle a lot of pain then consulting your vet is a good idea.

If your dog is chasing, licking, or biting his tail it could be a simple game, or there could be something more going on. Chasing and biting could be an indication of fleas or mites, licking could indicate allergies.

How to Keep Poop From Sticking to your Goldendoodles Butt

Also, be sure to watch out for the pesky robot vacs. They like to eat tails.

Check These Amazing Articles all About Your Goldendoodle

Why Your Goldendoodle Follows You Everywhere? | Paws and Learn

Are Goldendoodles Picky Eaters? (Inside Info from Real Owners) | Paws and Learn 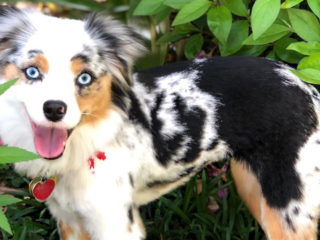 Shaving Your Australian Shepherd Is it Ever Ok? (The Truth Revealed)
← Read Last Post 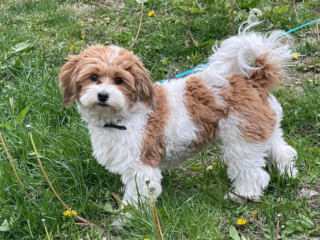