Everything to know about a Maltipoo Tail, (Docked, Curled, How to Groom)

Cute and curly, our dog’s tails can tell us a tale of their lives haha! But really Maltipoos have some of the cutest tails of all dogs I know, so who can help but to learn everything there is to know about them.

Some of the most pressing issues or questions we may have are about Maltipoo tails, styles, tail grooming, tails docked or cut? It’s all here!

Do Maltipoos have tails?

Maltipoos do have tails. they are naturally born with a long skinny tail that similar to a Maltese dog arches up and over their backs.

How long are Maltipoo tails?

Maltipoo tails are on average are 3 to 7 inches long. Think of the length and curve of a small banana. Their tail will be 1-4 inches long if it is docked.

Do Maltipoos get their tails docked

Maltipoos are not traditionally a breed that gets their tails docked. Some Maltipoo breeders will dock the puppies’ tails if they are following the AKC breed standard for the poodle. There is no reason they should get their tails docked and most owners prefer that they do not have docked tails.

Maltipoos are mixes between a Poodle and a Maltese they are bred to be companion lap dogs. Traditionally the standard was to dock tails of working breed dogs to protect them from injuring their tails in the line of work.

Tails are such an important part of how these sweet little dogs communicate with us there is no reason they should ever get their tails docked.

When I asked Maltipoo owners about it most owners agree that their dog’s long billowy tails are one of their favorite characteristics about their Malitpoos.

Owners that had Maltipoos who had docked tails didn’t have a choice as the breeder docked them before they got their puppy. 9/10 say they wish that their pup’s tails were not docked!

Today Poodles will often have their tails docked for aesthetic purposes. Traditionally poodles were working dogs and the AKC in the United States still follows docking for poodles as the breed standard. However, it is outlawed in the UK as an outdated and brutal practice.

There is really no reason to have any Maltipoo puppy get its tail docked as Maltipoos are not traditionally recognized by AKC, and will have no conforming appearance standards to uphold. Maltipoos can join AKC Canine Partners Program but are not required to conform to a certain appearance to join.

Do Maltipoos have curly tails

Maltipoos usually do not have curly tails. Their tails should make an arc from the base of the tail up and over their back. Any tail curling more tightly than that may be considered a flaw in genetics or breeding.

Some Maltipoo owners have noticed that their Maltipoos tail curls more than normal and almost looks like a pig’s curly tail. If this is the case for your Maltipoo don’t panic, it shouldn’t cause any problems, but you may want to check with your vet at their next appointment to be sure.

It would also be recommended that you don’t breed your Maltipoo as this flaw can be passed down to the puppies and become more problematic for each generation going forward.

The one issue some owners have with their Maltipoo curly tail would be that it can make grooming more difficult. Having a curly tail can cause more matting at the base of the tail.

Maltipoos wag their tails for many different reasons. It’s a big part of how they communicate with you. Wagging their tail doesn’t always mean they are happy. They could be conveying other emotions like nervousness or fear as well.

The key to understanding their tail wags is to put it together with all the other contextual clues they are giving you. What are their ears doing, their eyes, how is their posture? Noticing these things as well will help you know why your Maltipoo is wagging its tail.

For more fun articles about how your Maltipoo communicates with you check out these links.

Here are some things your Maltipoo could be communicating to you with its tail.

For most Maltipoos wagging their tails to communicate is a natural and normal thing for them to do. Occasionally you will find a Maltipoo that doesn’t wag its tail at all. Don’t worry, you are not alone. If your Maltipoo doesn’t wag their tail it’s most likely just part of their personality or genes. It could also be that they have an extra curly tail that makes it more difficult for them to wag, but it could also indicate a medical problem and they should be seen by your vet to rule out any serious issues.

If your Maltipoo has recently stopped wagging its tail then there could be other factors involved. If you have just moved, or they are new to your home this could just mean they are nervous and need some time to get acclimated to their new environment.

Some dogs are bigger tail-waggers than others. If your Maltipoo doesn’t wag their tail at all then you will have to learn to identify other body language cues to help you understand what they are trying to tell you.

How to Groom / Trim Maltipoo tails

Most of the time a Maltipoos tail is left full and uncut. Part of their charm is the gorgeous plume flowing from their rear end. This does require daily or at the least bi-weekly brushing. This Brush is the only one I have found that works really well for keeping the mats out of their long curly hair. If your Maltipoo does get mats in their tail it may be necessary to trim the tail, or possibly thin it out a little bit.

Another option for dogs who tend to get mats in their tails or for owners that like a little less maintenance is to cut/style your Maltipoos tail in what is called a bottle brush cut. It looks just like it sounds, the entire tail hair is trimmed to be only about 2-3 inches long and so it sticks out looking like a bottle brush.

Here is a video on how to groom your Maltipoos tail.

Other Tips for Maltipoo Tails Problems

If your Maltipoo is constantly Holding his tail down or it seems to be in a down position more often than the normal resting position this could indicate a problem called Luxating Patella. This really is just a fancy way to stay a misplaced knee cap. Besides the tail, another indication this may be the problem is if you notice your dog stretching out their rear limbs and walking in circles, or possible yelping or whining in pain.

Luxated Patella is a common problem for small breeds and often will self-correct after a few days of rest and stretching.

If it seems to be causing your dog a lot of pain or the problem is not going away it’s best to take your dog to the vet. They will assess the situation and if this is a recurring problem for your dog may recommend surgery to fix the problem. If surgery is performed it should be a permanent fix for your dog.

Sometimes along with your dog having issues with its tail your dog may start to limp. If that is the case you can read more about that here: Why is My Maltipoo Limping?

How to Keep Poop From Sticking to your Maltipoo Butt

This is a very serious problem, but thankfully very rare in Maltipoos. It can be important though that you learn to identify it right away so the issue can be dealt with before it causes permanent damage.

This can be caused by the constant beating of the tail against objects that may harbor bacteria. If the tail gets an open wound and the bacteria gets in it can lead to an infection that will spread and cause the tissue to become damaged or start dying.

Watch for hair loss at the end of the tail. Excessive itching, bloody or brittle skin, foul-smelling, excessive biting or the tail.

Take your dog to the vet right away if you notice any of these things in your dog. The vet will assess and most likely have to amputate the infected part of the tail. This may be a very sad thing to have to deal with, but if the infection spreads it could endanger your dog’s life.

If you enjoyed this article check out these other articles all about your Maltipoo!

How Much Do Maltipoos Sleep? (Inside Info From Owners) | Paws and Learn

Why Does My Maltipoo Eat Everything (Grass, Poop, Sticks, Dirt)? | Paws and Learn 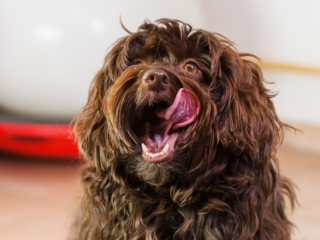 Why Your Havanese Licks so Much. (And What to do!)
← Read Last Post 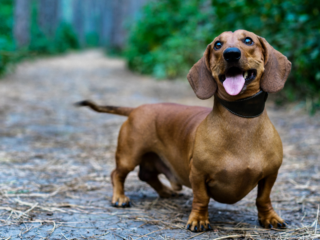 Obsessive Licking in a Dachshund, is it Normal? (Owners Tell All!)
Read Next Post →