A tail can tell us so much about our dog, they are a very beautiful and important trait of our precious Golden Retrievers. But what is it about the tail that makes it so special? How do we know if our Golden Retriever has a normal tail, or if something may be off or different?

Well, I was curious about this too so I took some time to Paws and Learn so I could find all the answers to every question you could have about your Golden Retriever tail. It’s all referenced here in this article in one easy place.

A normal Golden Retriever’s tail extends out from the spine in a straight line and slightly arches upward from its back. Its thickest and most muscular point is from the rear end of your dog and it should slowly taper to a point. The hair on its tail is long and feathery and may be a bit thicker than elsewhere on its body.

How long are Golden Retriever tails?

Golden Retriever Tails can range from 3.5 to 16 inches long, but the average is 10-12 inches long.

Do Golden Retrievers’ tails curl up?

Golden Retrievers do not have curly or curled tails. Their tails are long and straight and should arc up slightly. If your Golden Retriever has a kink or curl in its tail it could be a sign of a genetic flaw or an injury.

If you are not sure that your Golden Retriever is purebred you can find out by doing a genetic test. The most accurate genetic test is an Embark test. You can find this on Amazon.

If your test comes back that your dog is 100% purebred Golden Retriever and your dog has a curly tail then it’s likely your dog has a congenital deformity of the spine’s vertebrae called hemivertebrae.

This condition is inherited and causes the vertebrae in the spine to fuse together causing an abnormal twisting wedge in the spine that will cause your dog’s tail to curve.

If your dog has this condition it is important to confront the breeder from whom you got your dog and let them know. A responsible breeder will not breed dogs that carry this gene in order to help eliminate it from showing up in future litters.

If your Golden Retriever is still a puppy and has somewhat of a curly tail or holds it up over its back it is possible that it will straighten out as it gets older.

Golden Retriever Puppies will sometimes hold their tail up over their backs (what looks like a curled position) when they are happy, playful, or excited. If your puppy’s tail is down when resting there is no need to worry.

Do Golden Retrievers Have Docked Tails?

Since Golden Retrievers’ tails stay fairly in line with their bodies they are not prone to breaking or getting caught in the line of duty so there was no need to dock their tail.

A Golden Retrievers tail can also have a lot of good uses! Besides being able to communicate with other dogs and their owners (see the section about communication further down).

Golden Retrievers use their tail to help them balance on land as well as in water. When they are running their tail can help them maneuver and change directions more easily and while swimming their tail acts as a rudder.

Their tails can keep their bodies warm in cold weather by curling up underneath it.

As stated above there are rare instances that a Golden Retriever mix like a Goldendoodle may get its tail docked if the breeder is following the standard for poodles. You can read more about that in this article.

When Do Golden Retriever Tails get Fluffy?

One of the most beautiful parts of our Golden Retrievers is their long fluffy tails! When you have a Golden Retriever puppy you will notice that the hair on their tail is short and course. You may wonder when your dog will get that long feathery coat.

Golden Retriever tails will generally begin to get fluffy or feather out around 6-7 months old. Their tail will most likely not be fully feathered out until around age 2 or sometimes even longer.

This is a long process that will not happen suddenly overnight. It can also depend a lot on the genetics of your Retriever. If you are able to see how full and feathery its parent’s tails are that can give you an idea of what your pup’s tail may eventually look like.

Golden Retrievers wag their tails for many different reasons. It’s a big part of how they communicate with you.

Wagging their tail doesn’t always mean they are happy. They could be conveying other emotions like nervousness or fear as well.

The key to understanding their tail wags is to put it together with all the other contextual clues they are giving you. What are their ears doing, their eyes, how is their posture? Noticing these things as well will help you know why your Golden Retriever is wagging their tail.

Here are some things your Golden Retriever could be communicating to you with its tail.

It could also be temporary due to stress or changes in your dog’s life or environment and may go away once things are resolved. However, it may indicate a medical problem, in which case your dog should be seen by your vet to rule out any serious issues.

If your Golden Retriever has recently stopped wagging its tail then there are some other things you should consider. If you have just moved, or they are new to your home this could just mean they are nervous and need some time to get acclimated to their new environment.

Some dogs are bigger tail-waggers than others. If your Golden Retriever doesn’t wag its tail at all then you will have to learn to identify other body language cues to help you understand what they are trying to tell you.

This Brush works really well for keeping the mats away on long hair dogs like Golden Retrievers. If your Golden Retriever is prone to getting mats in its tail then it may be necessary to thin it out a little bit.

Here is a video tutorial on how to groom your Golden Retriever’s tail!

Because our dog’s tail is such a big part of them and how they express themselves it can be quite alarming if something seems wrong with it or if they seem like they are in pain.

You should always consult with your vet if you are worried something may be off, but in the meantime, I know that having an idea of what it might be can bring some peace of mind.

Here are some common problems that you might run into concerning a Golden Retrievers tail.

For the most part, if your dog is chasing its tail it’s most likely just a harmless and adorable game. Puppies tend to do this a lot because they are so playful and exploring more about their world and discovering their fun long tails. If your dog is chasing his tail it might be because he’s bored or it’s just a fun game for him.

The problem comes when your dog is obsessively chasing its tail and it seems like they are in pain, stressed, or biting its tail and causing things like bleeding, or hair loss.

Your Golden Retriever puppy or adult dog may hang its tail between its legs if it is nervous, scared, or feeling guilty for something. This is a temporary tail position and should not last long.

If you notice your Golden Retriever’s tail hanging down and it looks limp and unnatural then he may have a condition known as Limber Tail.

Limber tail Also known as swimmers tail, frozen tail, dead tail, broken wag, or cold tail is a condition that causes your dog to hold his tail limp and down instead of the usual upright position. Its official name is Acute Caudal Myopathy.

It is most likely to happen after your dog has had very active or strenuous play, exercise, or excessive tail wagging.

Sometimes a lot of swimming can cause it, being in cold wet weather, if they are confined to their crate too long, or if your dog’s tail is wagging and getting whacked on various surfaces.

This could cause your dog pain and swelling in their tail, making it difficult to sit. Usually, this condition will go away on its own after a few days of rest. It’s important to try and limit exercise and movement if you notice that your dog is experiencing this problem. If it is causing your Collie a lot of pain then consulting your vet is a good idea.

Taking care of our dog’s most stunning features like our Golden Retriever Collies Majestic fluffy tails may take a little extra work and know-how, but isn’t it worth it!

Other Articles all about your Golden Retriever

8 Reasons Why Your Golden Retriever Follows you Everywhere! – Paws and Learn 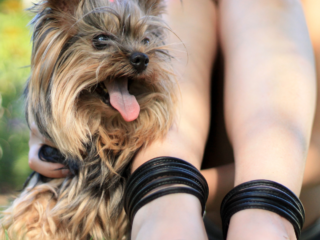 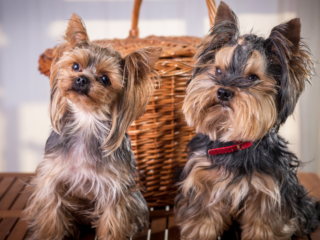