Basset Hounds are some of the most popular dog breeds around. They are known for their loyal personalities and, of course, their adorable droopy ears.

While many people are familiar with the Basset Hound breed, some people do not know that there are both American and European Basset Hounds, but what is the difference?

There are several physical characteristics that separate the European Basset hound from the American Basset Hound but other than a few minor differences, the two dogs are almost identical!

If you are interested to learn more about European Basset Hounds, what makes them different, their history, etc. keep reading to find out!

History of the European Basset Hound

All dogs have to come from somewhere, it is oftentimes very interesting to learn about different dog breeds and where they originated from.

Basset Hounds were originally bred in France during the 6th century and were used as scent hounds, meant to hunt rabbits and other small animals. The breed began appearing in America in the late 19th century.

The European Basset hound slowly gained more popularity over time and slowly made its way into the homes of people considered “royal.” There are several famous British royals who were known to own Basset Hounds, including Queen Victoria!

NOTE: The Basset Hound is one of the oldest dog breeds around!

While Basset Hounds are still used for hunting in some cases, as the years have gone on, this breed has become a very popular household pet.

Because they are so well behaved, social, and friendly, this breed is great for having around, especially with families and children, and is one of the best companions a dog owner can have!

American Vs. European Basset hound (What is the Difference?)

Oftentimes when people learn that there are both American and European Basset Hounds they begin to wonder, what is the difference between the two?

The truth is, American and European Basset Hounds are the same other than slight changes in their physical appearances.

Because of ancestry and breeding, this breed has experienced slight changes in appearance throughout time.

Other than these slight differences, these two dogs are exactly the same. Here are some of their most distinct similarities and differences:

NOTE: A European Basset Hound can range anywhere from $600–$3,000 depending on the circumstances.

NOTE: Keeping up your Basset Hound’s hygiene is key in making sure that no issues arise. Try wiping them down after being outside to remove any dirt, debris, or sweat that has built up between their skin folds. Basset Hound Ear Care and Cleaning Guide

If you are struggling with your Basset Hound begging for food, training might be a great option, check out this article to learn more: How to Train a Basset Hound (Tips & Tricks from Owners!)

TIP: Be careful when using treats to train your Basset Hound, this can cause them to gain weight even quicker.

If you are interested in getting a European Basset Hound, you are probably wondering what they look like if you aren’t already familiar.

This breed is considered to be a medium/large dog, usually standing at around 14 inches tall and weighing between 40–80 pounds (depending on whether it is female or male) and averaging between 26–35 inches in length.

The breed’s shorter bodies and amazing sense of smell is what make them perfect hunting dogs!

There is oftentimes a slight difference in weight when comparing the European Basset Hound to the American hound. The European usually weighs at least 75 pounds, whereas the American will weigh between 45–65 pounds.

Just like any other AKC dog breed, there is a standard look for European Basset Hounds.

European Basset Hounds must have certain attributes and characteristics that make them AKC certified. Some include their paw size, skin, head size, height/weight, etc.

Here are some of the AKC standards for the European Basset Hound:

One of the most important things that dog owners consider when getting a dog is what the dog’s temperament will be.

A dog’s personality and behavior are very important to consider, especially if they are going to be around other people or animals.

Thankfully, European Basset Hounds are known for being low-maintenance, friendly, and playful dogs.

European Basset Hounds do have their lazy moments, they love laying around on their comfy beds and sleeping.

Although they do love relaxing, European Basset Hounds still also like playing with their owners, children, and other dogs, they will typically even get along with cats!

This breed is known for being great for families, especially those who like to go out a lot and take their dogs with them. A European Basset Hound is always ready to go with the flow!

While European Basset Hounds are easy-going and loyal, they are also stubborn and very independent! These two personality traits make them harder to train than some other breeds.

How to Groom a European Basset Hound?

A lot of dog owners wonder what the grooming requirements will be for a new dog they may be considering adding to their family.

People are oftentimes concerned about the amount of shedding, allergies, etc. that can occur because of a dog’s fur.

Thankfully, Basset Hounds are known for having low shedding because of their short coats. While they aren’t hypoallergenic, there are less likely to cause allergies compared to other breeds.

There are several things to keep in mind when grooming a European Basset Hound, here are the most important:

NOTE: If you are unsure how often to groom your European Basset Hound, visit your vet! They will be able to provide some grooming services and help you out with deciding how often you should be grooming your dog in particular.

The health of our dog(s) is one of the biggest concerns for us dog owners. When people consider getting a new dog, especially if they are unfamiliar with the breed, the first question they may ask is if they are at risk for any health issues.

The European Basset Hound has several health problems that tend to occur within the breed. Some issues include eye problems, arthritis, teeth issues, ear infections, etc.

Thankfully, there are many treatments for any problems your dog may have. If you are concerned about your dog’s health, visit your vet, they will be able to find the best solutions!

European Basset Hounds are known to have lifespans that are decent for a dog of its size. They typically live between 10–12 years. They also aren’t at high risk for any fatal disease or illnesses; a lot of their health issues can be cured with medication, diet change, etc.

Here are some of the most common health issues that occur in the European Basset Hound breed:

NOTE: Addison’s Disease occurs when a dog is unable to produce certain hormones that regulate its internal organs. Thankfully, with the right medication, dogs have been able to live completely fine and comfortably while having the disease.

Read these articles next: (All About Basset Hounds!)

Why Does My Basset Hound Eat Everything (Grass, Poop, Sticks, Dirt)?

How to Train a Basset Hound (Tips & Tricks from Owners!) 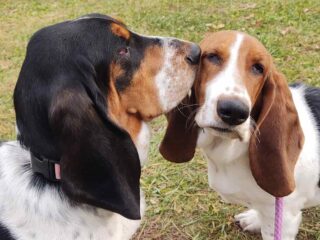 How to Train a Basset Hound (Tips & Tricks from Owners!)
← Read Last Post 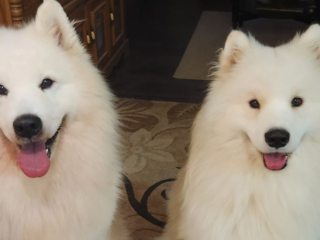 My Samoyed's Nose is Turning Pink! (4 Reasons Why)
Read Next Post →