Can Dogs Be Traumatized After Grooming?

If you have owned a dog before, you probably know how important it is to upkeep their grooming. Although, some owners find that their dogs are not a fan of grooming and can even become very upset about having to go to the groomer.

Grooming can be especially hard for dogs who become nervous easily. Several influences may cause a dog to act traumatized, anxious, stressed, or upset after a grooming session.

Most often, dogs become traumatized after grooming because of stress. This can be caused for several reasons including environmental change, other dogs being present, loud noises, and any other factors present at the groomers that cause your dog to become stressed or anxious.

Thankfully, some steps can be taken to ensure that your dog has a pleasant grooming experience before and after. If you are interested to know more, then keep reading!

Do Dogs Get Stressed After Grooming?

If you have owned a dog, you’ve likely experienced their hesitation to go to the groomer. While some dogs enjoy grooming, a lot of them do not.

Dogs are known to become very stressed before grooming, while getting groomed, and even after grooming. A lot of dogs that have had bad grooming experiences in the past are known to display anxious behavior when going to get groomed again.

Some dogs will become stressed just getting in the car if they know they are going to the groomer. While a small amount of stress is normal for a dog to experience, an extreme amount of stress could cause issues such as the groomer not being able to provide services safely and effectively.

NOTE: Finding a good groomer that offers a calm, relaxing grooming experience for your dog is key in eliminating any discomfort or anxiety that your dog may have.

Why is My Dog Weird/Skittish After Grooming?

A lot of dog owners have noticed that their dog doesn’t come back from the groomer like their normal selves. If you notice your pup acting strange or skittish after their grooming appointment, there is nothing to worry about, this is quite common!

Dogs will sometimes act weird after grooming mostly because of nerves, stress, or anxiety. However, once they become used to going to the groomer, they will typically not be as nervous. Just like humans, dogs can become anxious when experiencing something new.

NOTE: Weird and skittish behavior could carry on for a few days until your dog is fully comfortable once again — we will talk more about this below!

NOTE: Shave shock can occur if your dog is not supposed to be shaved, or perhaps is shaved/trimmed too short.

What is Shave Shock in Dogs?

There are many dog breeds out there that are not supposed to be shaved or trimmed short but unfortunately, this does sometimes happen.

Shave shock occurs when a dog’s fur is shaved off and it doesn’t grow back properly. This typically happens when a dog that is supposed to be shedding naturally is instead shaved down with clippers.

Shave Shock is common in double-coated dogs because their fur is not meant to be shaved. If a dog like this is shaved, likely, their fur will not grow back the same, sometimes growing back thin, patchy, or course.

Some dogs even begin experiencing alopecia, where the hair doesn’t grow back at all or even begins to fall out, leaving behind bald spots.

There are many alternatives to shaving a double-coated dog if they are not shedding their coat as fast as you would like, here are some suggestions:

Shave shock can cause your dog to behave differently and not act like themselves because they are severely uncomfortable with their fur not being the way it was.

It is widely known that dogs will oftentimes become upset after getting a haircut or being shaved. Some dog owners have noticed that their dogs will become moody or sad after leaving the groomer, typically this behavior will go away quickly, especially if your dog is a breed that needs to be shaved.

NOTE: Although you may be worried about your dog’s behavior after they are groomed, their behavior change is very common and normal!

Why Does My Dog Go Crazy After Grooming?

All dogs tend to react to grooming in different ways, while some dogs become tired, lazy, sad, etc. after grooming, other dogs get super hyper and will stay that way even when they return home!

A lot of times if your dog becomes crazy or hyper after a grooming session is because they are excited. This excitement can be caused by going to a new place, seeing new people, etc. However, this can also be a result of negative feelings.

Some dogs display this hyper/excited behavior out of their stress and fear of grooming. It is important to take note of your dog’s body language to make sure they are not acting out of stress instead of excitement.

TIP: A good way to know how your dog truly feels is to take notice of the way their tails and ears are laying; usually if their tails are tucked, or their ears are laid back, they are more so stressed than excited.

How Long Will My Dog Act Weird After Grooming?

A lot of dog owners become very worried if their dog is acting strangely after their grooming appointment, especially if they behave that way for longer than expected.

Typically, dogs who are acting strangely after grooming will be back to their normal selves after a few hours, or even immediately after exiting the groomers. Some dogs, however, will still be slightly anxious or worried for a few days after they are groomed.

If you notice your dog is still acting strange days after their grooming appointment, you may want to take them to visit the vet. A vet can give tips and tricks that may help your dog get back to its old self!

Sometimes dogs will walk funny after receiving grooming. This is usually due to their nails being trimmed too short, causing them pain when they walk. You can easily check this by inspecting your dogs’ nails. Unfortunately, there is nothing that can be done if the nails are trimmed too short, thankfully they will grow back over time.

NOTE: If your dog’s front nails are trimmed too short, thankfully they will grow back faster than if the back nails were cut too short. This is because the front paws aren’t used as much as the back paws, making it easier for the nail to grow back faster!

Can Dogs Get Sick After Grooming?

Although it isn’t common, dogs have been known to become sick after their grooming appointments. Thankfully, these symptoms typically go away fairly quickly.

If you notice your dog having symptoms of illness after their appointment, this is usually caused by stress. Some dog owners have stated that their pup has begun throwing up or experiencing diarrhea after their grooming session.

The symptoms of vomiting or diarrhea typically go away soon after the dog calms down and is back home where they feel safe; however, if you notice long-term symptoms, it is best to get your dog to the vet right away.

While a lot of times dogs will experience short-term symptoms of sickness after grooming, there can be long-term effects as well. Stress is one of the most common causes of intestinal and colon inflammation (colitis) in dogs. If your dog is causing itself extreme stress each time they visit the groomer, this may hurt its health in the long run.

Why Is My Dog Shaking After Being Groomed?

After a dog leaves the groomer, owners may notice that their dog is shaking. This is usually not anything to be worried about, they will typically stop shaking once they are reunited with their owner and back home in a comfortable environment.

There are several reasons why your dog may be shaking after their grooming appointment. Several reasons include body temperature, nerves, or sedatives.

While regular dog groomers are not supposed to sedate dogs during their grooming sessions (it is illegal), a veterinary hospital with certified vets and technicians are allowed to sedate dogs; however, this is usually only necessary for surgeries, teeth cleanings, and other more intense work your dog may be receiving.

If your dog tends to get worked up before or during a grooming session, a groomer may prescribe a medication to help them relax before their appointment. Usually, there should be no reason a dog is fully sedated only to receive standard grooming.

While shaking is usually related to nerves or anxiety, your dog may also shake because they are cold. After receiving a bath, and especially a haircut, they are more likely to become cold. This usually goes away after a good nap, which is good considering some dogs become very tired after grooming!

NOTE: If you notice your dog sleeping a lot after grooming, there is no need to worry! They will typically be back to normal after a good nap!

How Do I Relieve My Dogs Stress After Grooming?

While dogs typically feel better after being groomed, it is not uncommon for them to be upset afterward, especially if it is their first time at the groomer.

A lot of dog owners are concerned for their dogs after a grooming session and want to help them in any way that they can. Thankfully, many things can be done to ensure your pup feels comfortable after they leave their grooming appointment.

One of the most simple and best ways to give your dog comfort after grooming is to pet them and use soothing words.

One unique stress-relief technique that several dog owners suggest is taking your dog on a car ride! Rolling down the window a little and letting your dog breathe in the fresh air is one of the best stress-relievers! Here are several other ways to relieve your dog’s post-grooming stress:

NOTE: It is not a good idea to give a dog a new toy or treats when they are having stressed or wild behavior. Doing this only teaches them that they will get a reward if they act a certain way, which can become an issue over time.

After your dog’s first grooming session, it is usually easy to tell if they are going to have issues going to the groomer. If you are concerned for your dog, here are some suggestions that will keep both you and your dog from experiencing any bad trips to the groomer:

NOTE: Once your dog is used to the groomer, they will normally have calmer and more relaxed visits from then on; they will also notice that they feel much better after a bath and haircut!

TIP: Try touching sensitive areas of your dog often (such as the paws, head, nails, etc.) this can help them become comfortable so that once they visit the groomer, they will already be familiar with some of the techniques.

Read These Next: (All about Grooming!) 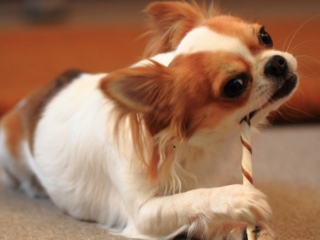 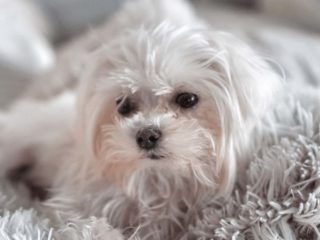