Many Basset Hound owners will agree that one of the most adorable and expressive parts of their dog is its tail! A Basset Hound’s tail is like an extension of its personality coming out of its wrinkly little body.

Whether your Basset Hound is having problems with biting its tail, or it’s hanging limply and you’re worried about what that might mean we have all you need to know about your Bassets tail in one place.

A normal Basset Hound‘s tail extends out from the spine in a straight line and slightly arching upward from its back. Its thickest point is from the rear end of your Basset Hound and it should slowly taper to a point which is generally white. The hair on its tail is long and sleek, but maybe a bit thicker than elsewhere on its body.

A purebred Basset Hound should have a long straight tail. If there are twists or kinks in the tail that could indicate a genetic flaw. Twists or kinks could also be from a previous injury to the tail.

How long are Basset Hound Tails?

Basset Hound Tails on average are 8 to 10 inches long with some being as long as 11 inches. Smaller Basset Hounds may have tails that range from 4-9 inches with an average length of around 6 or 7 inches.

I like to say just long enough to be adorable, expressive, and a little bit dangerous.
When they get excited wagging those long thin tails watch out! It’s like their own personal whip!

Not all Basset Hounds have a white tip on the end of their tails, but it is estimated that 90-95% do. This is a genetic trait that was historically bred for as it made it easier for hunters to see their dogs in the long grass or brush from the white tip on their tail sticking up.

Do Basset Hound get their tails docked?

Basset Hounds are not a breed that gets their tails docked. Their tail should be long and remain the natural length they are born with. On rare occasions, a vet may recommend docking a tail if your Basset Hound has severely injured it or it has a severe infection and it’s in the best interest of the dog’s health.

Tail Docking or bobbing is the removal of portions of a dog’s tail. Historically tail docking was done to prevent injury for working dogs.

This is interesting to me because Basset Hounds are historically working dogs because of their amazing sense of smell and ability to hunt small game they were for a long time bred exclusively to be hunting dogs. Knowing this we might wonder why Basset Hound didn’t historically have docked tails like other hunting dog breeds such as Yorkies or Jack Russell Terriers.

I have come to find out that hunters actually found their tails on their Basset Hound to be helpful and would use them as leverage to pull their dogs out of holes or burrows that they may have gotten stuck in while hunting.

The other reason why hunters left their dog’s tail long was to help them see their dog in the long grass. As their Basset Hound hunted and sniffed through the long grass their long tails would wag and move the grass back and forth and it would help their owner tell where they were. This along with the white tip of their tail sticking up from the brush can help the owner identify their location.

Do Basset Hound have curled tails?

Basset Hounds do not have curly or curled tails. Their tails are long and straight and should arc up slightly. If your Basset Hound has a kink or curl in its tail it could be a sign of a genetic flaw or an injury.

If you have noticed that your Basset Hound is acting abnormally by not wagging its tail as enthusiastically as it used to, or its tail is hanging down between its legs it could be quite alarming. Seeing our loving pets in pain or noticing something might be wrong can be scary.

Consulting with your vet should always be your first step, but if you are left waiting for a day or two before your furry friend can be seen then you may want some additional information to ease your mind.

If your dog is temporarily holding its tail in the down position it’s most likely an indication of submission or guilt, but if your Basset Hound is unable to hold its tail upright as it has in the past and it seems as if it’s in pain it could indicate a condition called limber tail or possible IVDD (Intervertebral disk disease).

Here is a list of other things that Basset Hound owners have said cause tail issues in their dogs. We will go into more detail below.

For more information on this, you can read this article on Wag Walking.

Another somewhat serious problem that can cause tail discomfort in Basset Hounds is a back issue known as IVDD. The technical term for this is Intervertebral disk disease (IVDD) it can also be described as a ruptured, slipped, bulging or herniated disk in your dog’s neck or back.

This type of back issue is fairly common in Basset Hounds. Quite a few owners that I talked with have had this issue with their dogs. Some have been able to help their dog feel better with resting and medication, some have had to get their Bassets operated on.

Here is a good resource to look at if you feel like this might be your Basset’s problem.

Dogs do have bones in their tails and they can if injured badly enough break. Since Basset Hound’s tails are so long and thin you will need to be extra careful with your dog’s tail not to injure it or get it caught in something like a door or a sharp object.

If you think your dog has a broken tail it is important that you take them to your vet.

Signs of a broken tail include swelling, bending, and a kink in the tail. Your dog might have difficulty moving or wagging its tail or are holding it in an unusual position.

For the most part, if your Basset Hound is chasing its tail it’s most likely just a harmless and adorable game. Puppies tend to do this a lot because they are so playful and explore more about their world while discovering their fun long tails. If your dog is chasing his tail it might be because he’s bored or it’s just a fun game for him.

The problem comes when your dog is obsessively chasing its tail and it seems like they are in pain stressed or biting its tail and causing things like bleeding, or hair loss.

If you notice your Basset Hound’s tail hanging down and it looks limp and unnatural then he may have a condition known as Limber Tail.

Limber tail Also known as swimmer’s tail, frozen tail, dead tail, broken wag, or cold tail is a condition that causes your dog to hold his tail limp and down instead of the usual upright position. Its official name is Acute Caudal Myopathy.

It is most likely to happen after your dog has had very active or strenuous play, exercise, or excessive tail wagging. Sometimes a lot of swimming can cause it, being in cold wet weather, if they are confined to their crate too long, or if your dog’s tail is wagging and getting whacked on various surfaces.

This could cause your dog pain and swelling in their tail, making it difficult to sit. Usually, this condition will go away on its own after a few days of rest. It’s important to try and limit exercise and movement if you notice that your dog is experiencing this problem. If it is causing your dog a lot of pain then consulting your vet is a good idea.

This is a very serious problem, but thankfully very rare in Basset Hound. It can be important though that you learn to identify it right away so the issue can be dealt with before it causes permanent damage.

This can be caused by the constant beating of the tail against objects that may harbor bacteria. If the tail gets an open wound and the bacteria gets in it can lead to an infection that will spread and cause the tissue to become damaged or start dying.

Watch for hair loss at the end of the tail. Excessive itching, bloody or brittle skin, foul-smelling, excessive biting of the tail.

Take your dog to the vet right away if you notice any of these things in your dog. The vet will assess and most likely have to amputate the infected part of the tail. This may be a very sad thing to have to deal with, but if the infection spreads it could endanger your dog’s life.

Finding a lump on your Basset Hound tail can be very concerning. While it’s not very common, a lump on your dog’s tail can happen. These masses can be cysts, warts, infected sebaceous glands, or benign tumors. It is also possible that it is a malignant tumor. Your vet will need to remove it and do tests on it.

It’s important to have any lumps removed from your dog’s tail in order to keep them from growing larger as well as prevent them from bleeding. Wagging a tail that is bleeding becomes a big mess quite quickly.

Basset Hounds wag their tails for many different reasons. It’s a big part of how they communicate with you. Wagging their tail doesn’t always mean they are happy. They could be conveying other emotions like nervousness or fear as well. The key to understanding their tail wags is to put it together with all the other contextual clues they are giving you. What are their ears doing, their eyes, how is their posture? Noticing these things as well will help you know why your Basset Hound is wagging their tail.

Here are some things your Basset Hound could be communicating to you with its tail.

There’s also been a study done that shows the direction that your dog wags its tail can show positive or negative emotion.

Some dogs are bigger tail-waggers than others. If your dog doesn’t wag its tail a lot it’s most likely nothing to be worried about. You will just need to work on identifying other body language cues to help you understand what they are trying to tell you.

If your Basset Hound has recently stopped wagging their tail then that could mean that there is something else going on. If you have just moved, or they are new to your home this could just mean they are nervous and need some time to get acclimated to their new environment. 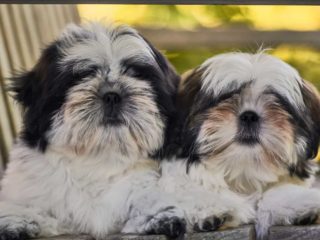 Shih Tzu Pairs: Getting A Second Shih Tzu! (Breeds They Get Along With?)
← Read Last Post 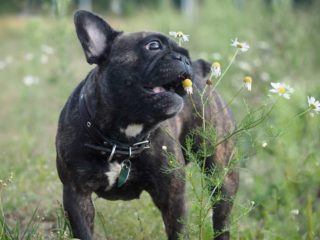 Why Does My Bulldog Eat Everything? (Grass, Poop, Dirt, Sticks)
Read Next Post →