If you are familiar with or have ever owned an Australian Shepherd, you probably already know how energetic and friendly they are. Aussies are some of the most popular dog breeds for families to own because they are typically non-aggressive and great to have around!

Although it is rare for Aussies to show off their impressive bites, some people do wonder why this breed has such a strong bite and why they aren’t as likely as other breeds to use it.

If you are interested to know more about Australian Shepherd bite force compared to other dogs, why some Aussies do or don’t bite, and what to do if your Aussie does bite, keep reading to learn more!

What Makes an Australian Shepherd’s Bite So Strong?

Each dog breed is different, and their bite forces are different too. Bite force can change based on many factors!

Australian Shepherds tend to have strong bite forces because of their emotional states. They are shyer than most other breeds, so when they feel scared or threatened, and decide to bite, they end up having a much stronger bite than other breeds.

A dog’s emotions are one of the main factors that determine whether or not it will bite strongly or not if they decide to. For example, if they are feeling upset or angry, they are more likely to bite harder than if they are feeling happy and playful and “nipping.”

Thankfully, Aussies aren’t very likely to bite. They are more likely to “nip” which is mostly because of their natural herding instinct that has been passed down throughout time and can be caused by their excitement and energy as well.

Australian Shepherds are known for being a very high-energy breed. Because of this, they are more likely to become upset and antsy if they don’t let that energy out.

If they are not able to release their built-up energy, they will be more likely to chew on everything, and if upset, resort to nipping or biting people, dogs, or other animals.

NOTE: It is important to take Australian Shepherds on walks and get them exercising regularly so that they can let go of all of that built-up excitement and energy.

There are also many other factors that can change the strength of an Australian Shepherd’s bite, including their size, age, the condition of their teeth, etc.

NOTE: Although Australian Shepherds do have one of the strongest bite forces among all dog breeds, they are still some of the most well-behaved, friendly, and loyal dogs out there; while also being way less likely to bite than some other breeds!

Dog bites are measured in pounds per square inch (PSI), this is a unit of measurement based on pressure. A smaller-sized dog will usually have a PSI of around 230–250 while larger dogs will have PSI’s around 300–500.

Australian Shepherds typically have a bite force of around 305 PSI. This is a little higher than other large-sized dog breeds but not nearly as high as say, a wolf (400 PSI), or a mountain lion (650 PSI).

NOTE: If you are interested in learning more about wolf teeth in comparison to dog teeth, check out this article: Dog Vs. Wolf Teeth (What’s the Difference?)

Even though Mini Aussies are smaller, they have the same amount of energy as regular Aussies and are more likely to bite if they have built up energy and excitement.

It is interesting to compare the bite force of an Australian Shepherd to other dog breeds and animals because each animal is unique.

While an Australian Shepherd’s bite force averages around 305 PSI, the strongest bite force among dog breeds belong to the Kangal breed (743 PSI), and the least strong belongs to the Chihuahua (5 PSI).

Let’s compare the Aussie bite force to some other breeds!

NOTE: Although some dog breeds are smaller, their bites can still be stronger than some larger breeds!

Why Does my Australian Shepherd Bite So Much?

Australian Shepherds bite for many different reasons, some of the most common is because they are giving in to their herding instincts, they are playing, bored, fearful, excited, and so many others!

Thankfully, if your Aussie starts biting as a puppy, it is usually easy to stop them from biting as long as you start training them and can stop the biting behavior early on.

Herding instincts are one of the most common reasons why Aussies will nip, especially at other dogs. You may notice your Aussie nipping at other dogs’ ankles or feet, this is a herding method that Aussies are already used to because of their history.

Here are some other common reasons why Australian Shepherds may bite or nip:

NOTE: If you are unsure why your Aussie is biting, talk with a veterinarian, trainer, or other dog professional to see if they have any tips/tricks for your dog in particular!

When someone is deciding whether or not to get an Australian Shepherd puppy, they may be concerned about whether or not this breed bites a lot, this is oftentimes a potential dog owner’s concern when it comes to any breed.

Australian Shepherd puppies are not likely to bite as long as they are well cared for, given regular exercise, and trained the right way early on.

As long as the right methods are taken early in an Aussie’s life, there is no reason why an Aussie puppy should be biting.

NOTE: If you notice biting or nipping behavior going on past the puppy stage, you may consider talking with your vet.

While Australian Shepherds are known to be very friendly and outgoing, they are a breed that is known for being shyer and more cautious around new people, this can especially happen when a dog is younger.

Aussies will typically bite the most when they are puppies because they are acting out of fear and uncertainty, they will usually grow out of this very fast.

NOTE: It is important to train Australian Shepherds early on in life so that they are able to socialize and be comfortable through new or stressful situations.

Aussie puppies normally do not bite super hard either, they will “nibble” more so than “bite” because they are teething. Just like human babies, puppies will want to chew on something when their teeth are growing.

How to Stop my Australian Shepherd from Biting?

A big concern for dog owners is when their dog won’t stop biting. Thankfully, there are many things that can be done to prevent your dog from biting or becoming a biter.

Thankfully, Australian Shepherds are easy to train, this is good especially if you notice that they are biting, and you want it to stop.

Training is the most important factor when it comes to getting your Australian Shepherd to stop biting and thankfully, there are many different methods that can work.

There are also other methods related to training that you can try when trying to get an Aussie to stop biting here are some of the most common methods:

NOTE: Giving your Aussie toys/bones can not only help their biting habits, but it will also help their dental health and keep their teeth clean!

NOTE: If your Aussie tends to bite when playing, it is best to stop playing immediately when they start to nip or bite. By doing this, they will realize that if they bite, the playing will stop.

If you notice your Aussie is biting and nothing is working to get the behavior to stop, speaking with your vet or another professional that works with dogs can be a great option.

These professionals can usually determine why your dog is biting and suggest the right training methods, medications, and many other aspects that can help your dog in particular!

Read these next: (All About Australian Shepherd Behavior and Teeth!)

8 Reasons Why your Australian Shepherd Follows You Everywhere! 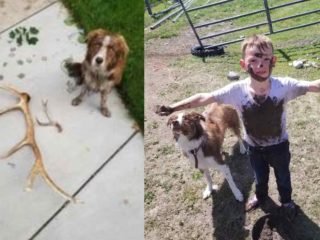 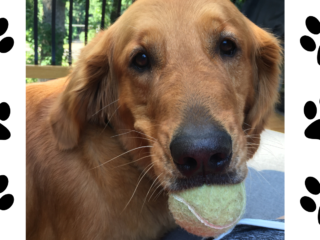 Top 5 Best Squeaky Ball Toys for Dogs (According to Owners!)
Read Next Post →