All About Golden Retriever Eyebrows and Whiskers

If you have a Golden Retriever, there is a chance they have used their loveable “puppy dog eyes” on you. It is interesting to see how many expressions one dog can have, but have you ever wondered how they can make those adorable faces?

Not only do Golden Retrievers have whiskers, the courser hairs around the nose, but they also have whisker-like hair along the brow bone which is what causes those adorable facial expressions to come out!

Golden Retrievers are among several other dog breeds that can have very noticeable “eyebrows.” If you are interested in Golden Retriever whiskers and eyebrows and what they are for, keep reading to find out more!

Do Golden Retrievers Have Whiskers?

Some dog owners oftentimes wonder why their dogs don’t have whiskers. The truth is, they are there, they might just not have many or they may not be easy to see.

While some dog whiskers are very hard to see, all breeds do have them, including Golden Retrievers!

If a Golden Retriever has one of the coat colors listed above, their whiskers will likely match their fur, this is why it is sometimes harder to see those whiskers if they are light-colored or happen to blend in with the other fur really well.

Just like all other breeds, a Golden Retriever’s whiskers will help them navigate their way through the world around them and they will keep them throughout their lives.

Not only are whiskers good for navigational purposes, but they also help a Golden’s reflexes and can help protect their faces from dust, debris, and other unwanted particles from getting on them.

What Are Golden Retriever Whiskers?

Anyone familiar with animals typically knows that a lot of different animals have whiskers, but a lot of people are not aware of what whiskers actually are and what their purpose is.

Whiskers, which are also called “tactile hairs,” are the coarse hairs that are typically found around the snout, specifically under the chin and around the mouth and nose. They are used as radar-like tools for dogs, helping them sense their way around the world.

If dogs didn’t have whiskers, they would be lost. They work to send information to the dog and help them in knowing what is around them. Whiskers can also come in a variety of different lengths!

Golden Retriever whiskers work mostly by using the air currents to detect what is around them, they can also help a Golden avoid bumping into things, especially in the dark!

Vision aid is one of the most important roles that whiskers play in a dog’s life, helping out their peripheral vision to ensure that they don’t run into anything that they shouldn’t.

While whiskers are a type of hair, they are not the same as normal dog hair/fur. Whiskers are deeply embedded into the dog’s skin.

Because whiskers can have feelings and sensitivity, it is not always a good idea to trim them. Trimming whiskers could cause your dog a lot of confusion since it is their way of navigating the world around them.

A lot of Golden Retriever owners are known to trim their dog’s whiskers for aesthetic reasons. This however can reduce your dog’s ability to use the sensors that those whiskers help them have.

Golden Retriever owners who trim or remove their dog’s whiskers for aesthetic purposes are typically using them for dog shows, thinking that the dog will look more presentable when in front of a crowd and judges.

While removing whiskers is a choice that some owners make, according to the Golden Retriever Club of America (GRC), which is an official American Kennel Club (AKC) breed club, dogs competing in the competition are permitted to have their whiskers removed, but it is not preferred.

In certain circumstances, a Golden owner may have to trim their dog’s whiskers. For example, if their whiskers are way too long and are causing the dog discomfort by falling into the mouth, eyes, etc. it may be best to trim the whiskers.

If you are considering giving your Golden Retrievers whiskers a trim, it is best to know what you are doing, or consider taking your dog to see a professional groomer who has experience and can safely trim your dog’s whiskers.

Trimming the whiskers with scissors is the best option because no damage is caused to the root of the hair follicle and your dog will feel no pain, unlike plucking which causes damage and can cause pain to the dog.

Why Are My Golden Retrievers Whiskers Falling Out?

While some dogs have whiskers that are not noticeable or they only have a few, it is oftentimes a concern for dog owners when their pup who has always had whiskers, begins to lose them.

If you notice a couple of your Golden Retriever’s whiskers falling out, don’t be alarmed. Oftentimes dogs will lose whiskers as they grow older; however, there could be other reasons such as illness or stress causing their whiskers to fall out.

While there is oftentimes no need to worry if you notice some of your dog’s whiskers falling out, there are several reasons that need to be addressed quickly if this is occurring.

One of the main reasons why a Golden Retrievers whiskers begin to fall out is malnutrition. With a proper diet, whiskers tend to grow back better and stronger.

Here are a few reasons why a dog could become malnourished:

One of the most important foods to give your Golden Retriever if they become malnourished are foods containing fat and proteins! The best options are meat including turkey, chicken, or lamb!

NOTE: There are specific diets that Golden Retrievers are known to be on including lean meat diets, moderate to high protein diets, carbohydrate, and low to moderate fat diets! These can all help certain problems your pup may be having, including losing whiskers and eyebrows!

Do Golden Retrievers Have Eyebrows?

While it looks like some dog breeds have eyebrows, this is normally just the brow ridge that is making them look like they have eyebrows. This is why they can form great facial expressions.

Dogs don’t need eyebrows like humans do because they don’t sweat as we do. While there is no use for them for sweating purposes, there are some dog breeds that have “eyebrows” that assist them in other ways.

Golden Retrievers have eyebrows that consist of smaller whiskers along the brow bone, also called “whisker eyebrows.” These eyebrow whiskers grow for several reasons including eye protection and navigation for the dog.

The buildup of these small, coarse hairs around the brow ridge makes it appear like a Golden has bushier eyebrows. Sometimes it is easy to tell where the eyebrows are on a dog because the fur will be colored along the brow ridge, sometimes turning grey or white with age.

Why Do Golden Retrievers Have Eyebrows?

These “eyebrow whiskers” on the brow ridge are known as “supraorbital whiskers” which act as sensors just like normal whiskers. When a Golden brushes up against something with their head, their eyebrow whiskers will be able to sense it and relay that information back to the dog!

Golden Retrievers are one breed that is known for their “eyebrows” because the fur buildup on their brow ridge is bushier than a lot of other dog breeds, making them even more adorable!

Not only are Golden Retrievers’ eyebrows great for aiding them with protection for the eyes and navigation for the dog, but they are also great in order for their owners to know what they are feeling.

Just like humans, a Golden Retrievers eyebrow expression can tell us a lot, for example, you may be able to tell whether your pup is sad, happy, angry, etc. just by watching their eyebrows. Along with the eyebrow movements, they may also tilt their head!

Why Are My Golden Retrievers Eyebrows So Long?

Even though eyebrows are very helpful to Golden Retrievers, sometimes they can grow so long they become overwhelming, and owners will wonder why they have become so long.

Golden Retrievers will sometimes grow long eyebrows solely because of genetics. If your dog is from a line of longer-haired or curly-haired Goldens, then your pup will probably end up with longer brows than most other Golden Retrievers!

Because of genetics, some Golden Retrievers will not only grow longer eyebrow hair than other dogs but longer hair all over the body in general, especially on certain areas of the body such as their chest, face, and tail.

NOTE: It is important to upkeep a Golden Retrievers grooming to ensure that their hair does not become too long, this results in matting!

Can You Trim a Golden Retrievers Eyebrows?

It is best to leave a Golden Retrievers eyebrows alone and not trim them, but, like whiskers, if they become overbearing, you can trim them and get them out of the dog’s eyes, so they don’t become irritated.

There is nothing to worry about if you must trim the eyebrows or the whiskers, this will not hurt your dog, it could cause them confusion once they try to navigate the space around them, but thankfully there aren’t enough pain receptors in the hair to cause them any pain.

TIP: If you are grooming your dog’s face, try to avoid pulling on the whiskers on both the snout and the eyebrows so that you won’t cause any discomfort to your dog.

It may take whiskers and eyebrows a longer time to grow back because they do consist of much courser and thicker hair, you may even notice not as many hairs grow back, especially if they have been plucked or shaved and not just trimmed.

NOTE: Dogs go through hair growth phases the same as humans do, this can determine how quickly the hair grows back, or if it does at all, plucking is not ideal because it can not only damage the root of the hair but will also cause discomfort and sometimes pain for your dog!

Read These Next: All about Golden Retriever grooming, tails, shaving, and more: 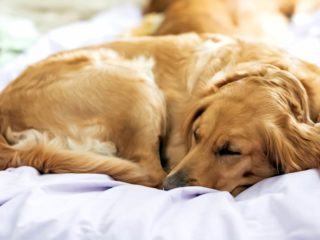 Golden Retriever Sleep Guide (When Will My Puppy Sleep Through the Night?)
← Read Last Post 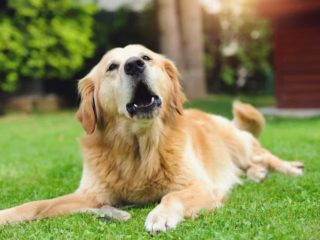